The latest Oswald short, Bright Lights, actually is from 1928. There are about 8 shorts, between the end of 1927 and the beginning of 1928 that I do not have, and I’m not sure where I might be able to get them, but if anyone has ideas, please let me know.

That said, Bright Lights, in the form presented on the Oswald DVD, is an astoundingly hilarious short. It brings Oswald front and center as a comedic figure, enacting a celebrity fantasy, but puts him in many funny situations. I say in the form on the DVD, because there are definitely some scenes missing from this transfer, that were in the original cartoon but are not presented here.

The set up is a vaudeville stage, where a world famous female performer is appearing, and we see the beginning of her act as the short opens. Multiple dancers on the marquee, appearing in electric lights, fade into the live dancers on stage, in a nice bit. 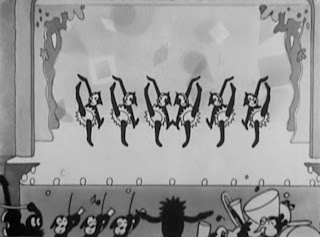 After we see the dancers do their act for a while, interspersed with shots of the orchestra, we cut to Oswald, outside admiring the poster of his celebrity crush. In a funny gag, he is trying to think of how to get the 50 cent entrance fee, and rests his hand on the poster, strategically placed on the woman’s bottom. The woman in the poster gets offended and moves, causing Oswald to fall. 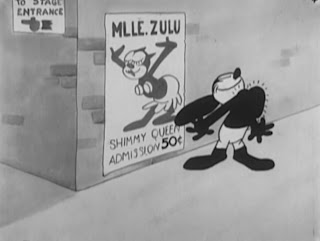 He schemes many ideas to get in the show through the backstage area, in what is probably the funniest sequence of the Oswalds so far. He tries to run past the guard, flipping and flopping, he jumps over him, he even ties the guard in a knot around a lamppost, only to be stopped by security inside. Finally, he’s able to sneak in under the shadow of a rich fellow headed backstage. 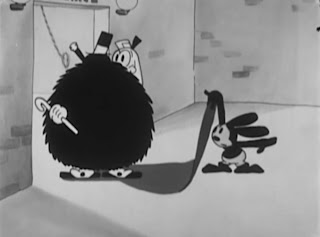 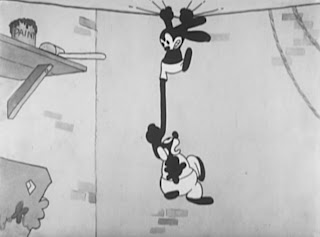 Finally, he is able to reach a mallet and clobber the tiger, but not before the lions also escape. As Oswald makes his way down, the lions run across the stage, leaping into the crowd and straight at the viewer. It’s a magnificent piece of animation. 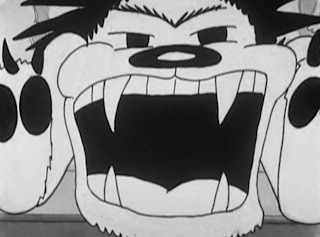 The crowd runs out of the theatre, deflating the theatre, but Oswald sneaks out the side. The lions chase him off into the sunset.

I am not doing this justice, as I’m short on time today, but Bright Lights is a magnificent short. The two main things I was struck by were the great gags and humor, and Oswald’s appearance. He looks more like the later Mickey in this short than I have seen in the previous ones. I don’t know if that is an evolution from The Ocean Hop to now in the intervening shorts that I don’t have, but it’s very noticeable. If you are on the fence, go get this DVD now and you won’t be sorry if you watch Bright Lights.
All images copyright Disney. All rights reserved.
Posted by Ryan at 4:54 PM