With The Haunted House, I’m finally getting what I want out of Mickey Mouse cartoon. This is a truly great short, and one that I am hoping more people will come to recognize as a great Mickey Mouse vehicle. There’s everything one could hope for – story, music, great animation and funny gags. It’s all here. 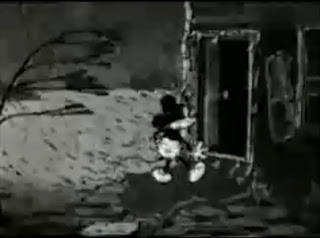 Let me stop my gushing and get on with it. The Haunted House breaks the formula of putting Mickey into a setting and having the music start immediately. Instead, it starts off with an establishing shot of the titular house, which looks like a menacing face on the horizon. Then we see Mickey struggling through a storm trying to reach the house. The music, the rain animation and the blowing wind that moves the objects in the foreground all help to give a sense of foreboding.

Of course, Mickey enters the house, after being prodded by a nearby tree. Once inside, he is frightened by a succession of creatures, including bats that fly straight at the viewer, a spider that drops in and swings and finally the sounds of ghosts. The sound here is key, because we don’t see any ghosts, but Mickey gets progressively more frightened, and it’s the sound that puts him over the top. It’s a very clever use of the sounds to create more suspense.

The next sequence is particularly good, mainly for the skill in the animation. Mickey enters a hallway, where the lights almost immediately blackout. 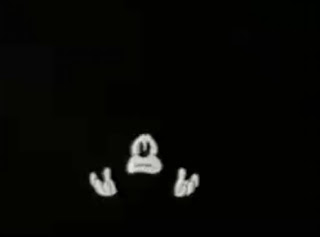 Then, he is able to light a match, and look around to see what is going on. 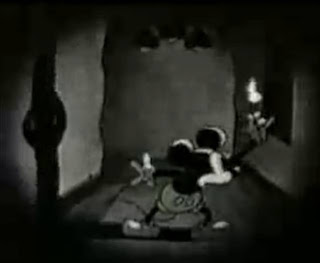 The sequence is incredible, because it takes two different disciplines and makes one flowing scene. First, the ability to highlight only Mickey’s face and hands in an otherwise dark room and get across emotions and feeling is amazing. Then, to do the match light scene, and have the flickers of the match play with the lighting is another step up. This is the first time I have seen this level of craft in the Mickey shorts, but it’s a major step forward.

Of course, we have a musical number in this short, but it makes perfect sense. The ghosts corner Mickey, and we see him turn to the camera to express his fear. 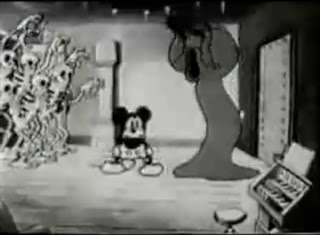 The ghosts force Mickey to play the piano, so they can dance. And the next few minutes of the short are devoted to the skeletons around the house. Much of this is derivative of The Skeleton Dance. There is animation of four skeletons dancing that I would swear is lifted directly from that earlier film, if it didn’t end a different way. But similar ideas to The Skeleton Dance are all around, like a skeleton playing himself like a xylophone, for example. 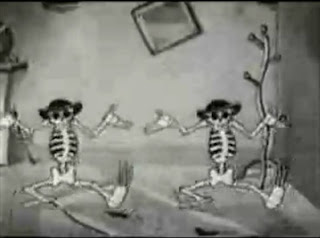 Finally, Mickey finishes the song and makes a break for it, running into skeletons all along the way, even in the outhouse. Mickey’s run for the hills signals the end of the short. 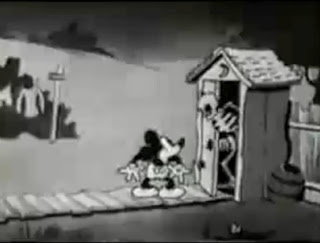 With a simple twist on the musical number, The Haunted House manages to give meaning and purpose to the silly little dances that these early shorts have featured to this point. It will bear watching to see if this is the beginning of a trend or not, but it’s an encouraging sign to see the story provide the framing for the music.
Posted by Ryan at 9:54 PM