Arctic Antics is a rather, well, silly entry into the Silly Symphonies, but it does have some interesting features. There are a couple of nice experiments with motion and perspective, and the appearance of a polar bear that looks very familiar.

The basic outline of the short is exactly what it says, the antics of arctic creatures playing, dancing, singing and eating on ice flows and glaciers. Like most of the Silly Symphonies, there is no narrative flow besides the music carrying things along. It’s not a detriment to the shorts most of the time, but Arctic Antics does lack a bit of cohesion. 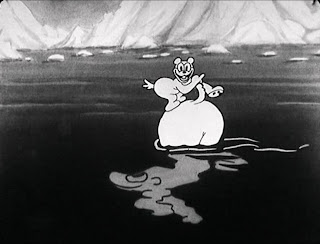 The beginning sequence, featuring a polar bear cub riding on the back of a white seal, is quite good, and features some very interesting motion. The cub jumps over ice flows, while the seal goes underneath, and the cub lands back on the seal on the other side. It’s a cute gag, but the real interesting thing is the way the seal is drawn while underwater. Again using the techniques from earlier Silly Symphonies, we get to see the animators trying something new with viewing a character through the water, not just their reflection. This is a natural extension of what we saw in Springtime, with the frog viewing his reflection.

The next sequence is an interesting set of details as well. While various animals float right to left in the foreground, joining in the song where appropriate, the back ground animals stay put, dancing and singing. It’s very neat to see two different speeds of motion in the same shot like that. It’s not something you would expect, but it works very well. 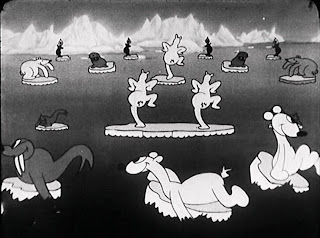 Of course, the most memorable piece of Arctic Antics has to be the appearance of the “Mickey” polar bear. It’s not surprising that the animators would reuse model sheets or repurpose characters, due to the amazing time crunches they were under on these films. It is surprising, however, that they would do so with the studio’s most recognizable character. There’s no doubt audiences would see this little guy as a Mickey clone, so it’s a mystery as to why they would insert him. 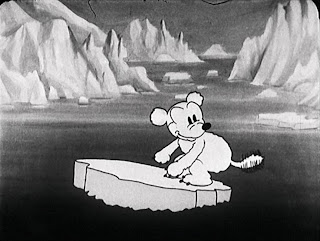 There are few smaller sequences between the Mickey bear and the last major set piece, but they’re fairly unremarkable. A walrus is used as a bass, a seal plays with his food of a fish to entertain other seals – nothing very new or innovative, and not particularly entertaining to me. 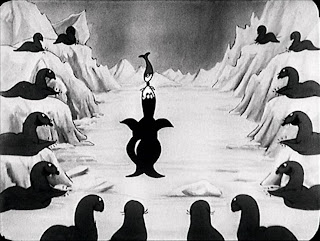 The last part of the short, though, is dedicated to a group of penguins marching along to the old song “Parade of the Wooden Soldiers,” and that’s quite fun. There is a smaller penguin unable to keep up to provide some comic relief, but the whole thing is quite good. The music is peppy and keeps things moving, and the penguin animation is done quite well. 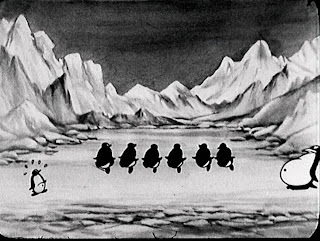 Arctic Antics will probably mostly be remembered for the Mickey bear, but to me, the penguin sequence is the best part of the short. As a whole, though, there’s not much new here to interest a repeat viewer.
Posted by Ryan at 3:20 PM