After Midnight in a Toy Shop, I wondered aloud whether there was going to be a movement in the Disney shorts, especially the Silly Symphonies, away from the song driven actions to more story based shorts. Monkey Melodies definitely is in the latter camp, offering a hero whose movements we follow through the majority of the cartoon, although not as completely as Midnight in a Toy Shop. 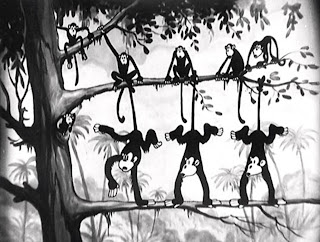 Before I go into that, however, I would be remiss if I did not send major kudos out to David Gerstein, who provides the DVD commentary for this short on the More Silly Symphonies Walt Disney Treasures DVD. The fact that David takes the time to frequently comment on this site is a source of pride for me, and his commentary is very illuminating. For example, did you know that there was an abundance of popular songs about monkeys around the turn of the century? That’s just one of the things I learned from David’s commentary. 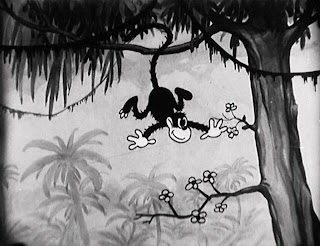 Most of this short focuses on a monkey who is simply enjoying his day in the jungle with his sweetheart. The monkey moves through the jungle sharing a dance with his female companion, then splitting bananas and taking a stroll through the river. It’s the kind of aimless lovesick rambling that many of us would love to do from time to time, and is very effective as escapism.

One thing I noticed and David points out in the commentary, is that the design of the monkey leads changes frequently. Several different animators took the lead in various sequences throughout this short, so the monkeys were done by different hands. They vary from very cartoony goggle-eyed characters to loose limbed, extra furry monkeys within moments of each other. It’s somewhat jarring, even though each interpretation is well done. 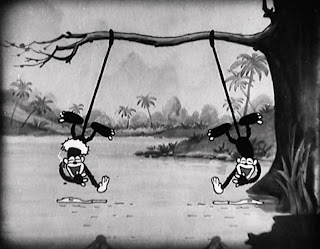 The other thing I noticed was a great sense of depth in the animation. For example, the monkeys dance through the treetops, with background behind them and vines and foliage in front of them, providing a real depth to the shot that has not been seen in other shorts. 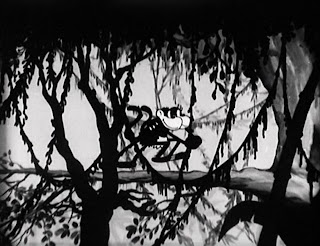 There’s also some great work with water effects here, such as an alligator pursuing the monkeys or the end scene that has the monkeys dangling over a pool of water, and the final kiss taking place in reflection. To me, this shows again the willingness of the animators to take more chances and push the boundaries in the Silly Symphonies. 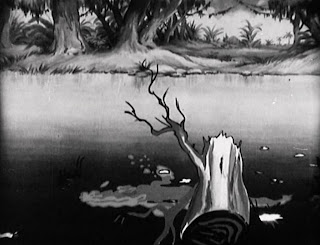 Of course, the fine commentary also points out the use of several of these monkey-based pop songs. I’m sorry, just the thought alone makes me laugh, but it is one of the first times Disney used pop songs in the shorts. Songs like “Down in Jungle Town” or “At a Georgia Camp Meeting” are used to great effect in dancing sequences like the alligators before they start pursuing the monkeys. 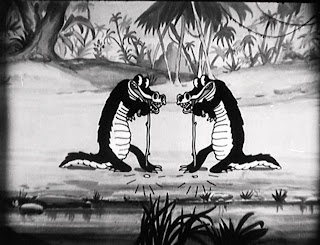 Monkey Melodies, to be honest, is not a fantastic short, but it’s not too bad. The move towards a more story-based production is on full display, but is still a work in progress here. As things go along, we’ll see how the Silly Symphonies evolve into something new.


All images copyright Disney. All rights reserved.
Posted by Ryan at 4:13 PM