Ah, Goofy. The loveable loser who does just about anything, and never does it well, returns in Tiger Trouble. This is the first short of 1945, and it continues a well worn path of having Goofy demonstrate a “skill” while the narrator opines about the proper way of doing things. 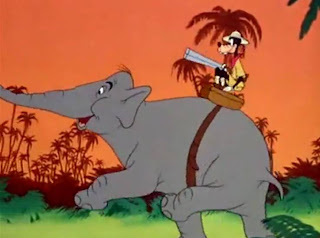 While Tiger Trouble is not necessarily a “how to” short, it still follows the same procedures. The subtle difference here is that the narrator is talking about the wonders of hunting a tiger, without specifically referring to what Goofy is doing or instructing him on how to do it. Does that little change make a difference? Yes, if only because Goofy is not interacting with the audience through the narrator, but instead with the other characters in the short. 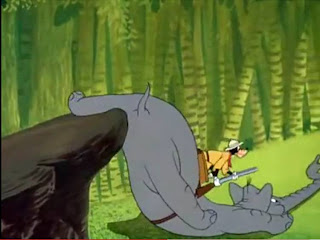 Goofy’s sidekick in this escapade, then, becomes not the audience or the narrator, but the elephant he rides. The elephant takes on characteristics more like a dog, and provides some great comedy. Take for instance when Goofy and the elephant stop for a picnic, and the scene is set more like a nice countryside afternoon than a jungle safari. The elephant sits up nice and proper to consume the picnic lunch. 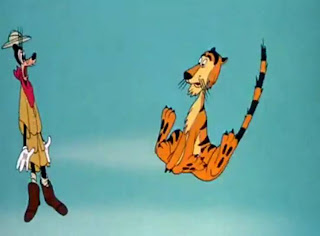 The tiger is an interesting character as well. The look of the tiger doesn’t call to mind famous Disney cats like Shere Khan in The Jungle Book, but instead more comedic and cartoony. He reminded me more of Snaggletooth from the Hanna Barbera cartoons than anything I’d expect from Disney. 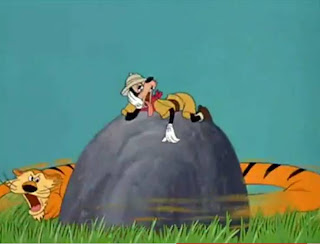 Some funny gags come from the confrontation between Goofy and the tiger, including some fun uses of off camera action. When Goofy gets dragged into the bushes, we get to hear the tiger thrash him about, then see Goofy thrown out in the midst of the jungle before getting dragged back inside. It’s a silly gag, but one that’s used to great effect.

The end result of the short comes up with some nice new characters in the tiger and the elephant, but not a lot of great bits from Goofy. It’s a funny short, but could have been a Donald short just as easily. There’s not a real reason to have the Goof here, but it’s always good to see him just the same.