Many animation historians and people much smarter and more experienced than I have named Pinocchio as the masterpiece of Walt Disney’s first Golden Age of Animation. Not to say that I disagree, but I think there is a definite difference between a technical masterpiece and something that the audience will embrace. 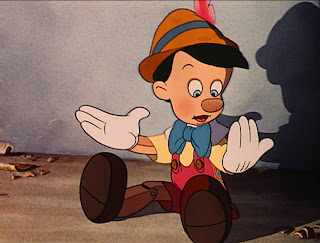 First, let me say that Pinocchio is a fantastic film. The artistry and storytelling are beyond compare. The leaps made from Snow White to Pinocchio are impressive. The characters, who were all retooled in the middle of development, are extremely well done. The backgrounds are very detailed and convey the tone and mood of each scene. 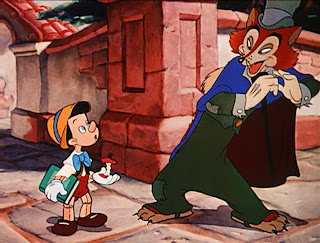 All that being said, I would rather watch Snow White than Pinocchio. This is a debate that my wife and I have often – what makes a film great? A film like Pinocchio is great because it manages to affect the viewer emotionally. The story is engaging, the characters lively, and it reaches a place within the viewer that few films can. But I’d rather watch Snow White, because it’s more fun, and the story is still as good as Pinocchio, if not as emotionally resonant.

Pinocchio’s strong point is the emotion it manages to convey. From the very first scene, where Geppetto finishes Pinocchio and wistfully hopes for him to become a real boy, this is an emotional film. It’s easy to feel Geppetto’s desire for love, to feel the fear of the boys on Pleasure Island, the joy of Pinocchio and Geppetto when they are reunited, and the despair when Pinocchio “dies.” 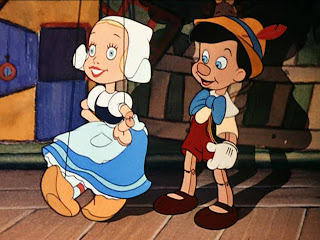 This film more than Snow White relies on its main characters. There is very little slapstick or gag sequence like we saw with the Seven Dwarfs. Instead, it’s the personality of the characters that is the driver of this film. Pinocchio’s innocence is his defining trait, which is a far cry from the original book or how he was being developed in the early days of this film. Jiminy Cricket’s character is probably the best, as he is the de facto narrator and gets most of the screen time. Even the side characters, like Figaro and Cleo, are easy to relate to. I felt for Figaro the entire film. That poor cat gets mistreated and pushed aside all the time! 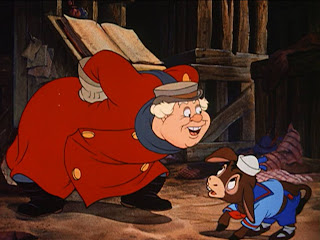 The darkness of the second half of this film is where I feel it achieves technical brilliance, but loses some of the mass appeal. The Pleasure Island sequence is terrifying, plain and simple. Seeing the coachman talking with Honest John and Gideon you get the sense of foreboding, but then watching the boys change to donkeys and realizing that they will not get out, it is sheer terror.

Then, having Pinocchio realize his lesson and take off undersea after Geppetto, there is the massive whale Monstro to contend with. The whale chasing Pinocchio and Geppetto around the ocean is scary, but not quite the same emotional turmoil as the Pleasure Island bits. 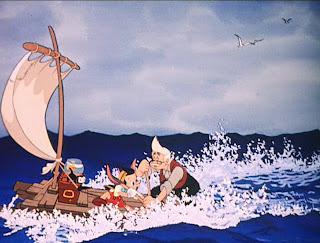 Where I felt like this film did not capture me was with a sense of fun. Jiminy Cricket is the main comic relief or gag for the film, but it wasn’t enough. Seeing Pinocchio get caught up by Stromboli and then off to Pleasure Island, the viewer is constantly worried, and having Jiminy voice those concerns does not allay them. That is why I feel better watching Snow White than I do watching Pinocchio.

That is not to say that one is better than the other, they are just different films. Pinocchio may well be a better film from a storytelling and emotion standpoint. It’s just difficult to watch, because it is a mature film for someone who has children and has a hard time watching Pinocchio being led astray. Regardless, Pinocchio is a masterpiece that should be viewed by any serious student of animation.