The Silly Symphonies were originally a way for Walt and his crew to push the envelope beyond just Mickey Mouse. We saw that in the very first edition of the series, with inventive shorts such as The Skeleton Dance or Hell’s Bells. As the series draws to a close, though, the animators revisited a subject that they had done earlier – The Ugly Duckling.

The 1931 black and white version of this tale was very good, but this 1939 version is a masterpiece. The animation is as good or better than that of Snow White, and the emotions that come from just this small “duck” are amazing. This was truly a pinnacle of Disney animation.

We all know how this story goes, so there’s no need to rehash the basic plot, but it’s the details that make this one so powerful. For example, the beginning of the short features the birth of the title character, and the whole process of revealing the ugly duckling takes almost two full minutes. We see the father duck pacing back and forth, impatient for the delivery, the worried look of the mother, and the joy and elation after the eggs hatch. 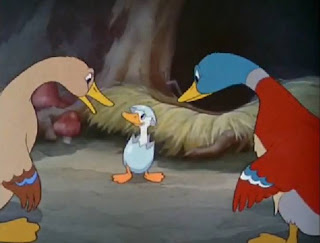 Just this sequence alone is breathtaking in its manipulation of emotions. It’s the perfect set up for the next reveal, when the ugly duckling pops out of its shell. All the emotion turns on its head, as the once jubilant father becomes angry and confused. The mother goes from joy to shock, and the joy goes over to the child. 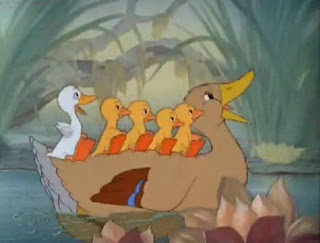 This jujitsu of emotions is amazing to watch. Even moreso when you consider what happens afterwards. The duckling continues on, happy as a clam, ignorant of the fact that he is what caused the tension between the mother and father. It’s only when the mother shoves him away that it begins to dawn on him what is going on. 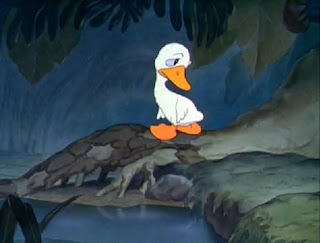 That revelation is so simple and beautiful, that it’s hard for me to describe. Literally, we see the emotion wash over the duckling’s face, as it begins to sink in that he is without a family, and has been abandoned. Seeing the tears drop and the soft “plink” sound as they hit the ground is very moving. 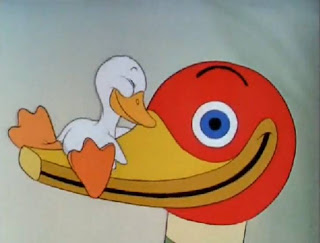 That heartbreak is only enhanced by the duckling’s encounter with other inhabitants of the lake area. There’s a family of birds and then a wooden hunter’s decoy. You see how hard the little guy is trying to fit in, but it just isn’t working. Seeing him get his hopes up, then have them dashed again is heart breaking. 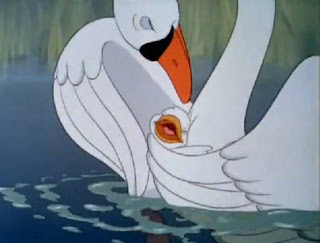 When he finally unites with the swans, it’s a thing of beauty, because it’s been earned. The feelings developed throughout the short lead to that moment and do so beautifully. This is probably the finest example of storytelling in the Silly Symphonies, and one of the most charming as well.