Describing the short Der Fuehrer’s Face is difficult and uncomfortable. How do you really review a short that features a beloved character like Donald Duck dressed up as a Nazi, the most brutal party of killers that this century has known? Imagine a short today where Mickey became part of the Taliban or Al Qaeda. The Nazi/terrorist comparison doesn’t quite ring true, but it’s part of the difficulty of describing this short. 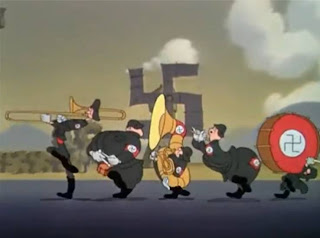 I’m a World War II buff, as I’ve stated before on this blog. My favorite novels are Herman Wouk’s World War II books, and I know a great deal about the war. So, knowing the atrocities committed in the name of Hitler, seeing one of my favorite cartoon characters say “Heil Hitler” makes me gag reflexively.

At the time, though, Hitler was not a madman who committed near genocide, he was instead a foe of the United States. Therefore, in that context, making fun of him to belittle him makes perfect sense if you were in Hollywood in 1942-1943. This short was released January 1, 1943, so it was right in the midst of the war effort. 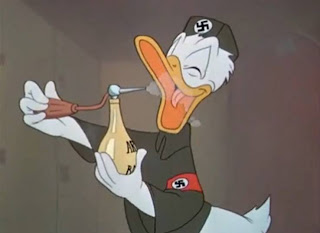 If you can move past the horror of the Nazis, the short is quite funny. The original song “Der Fuehrer’s Face” is a hilarious send up of the totalitarian regime. The lyrics tell how all the “Nutzis” have to do whatever the Fuehrer says, no matter how silly, and then take time out of their day to thank him for the oppressive conditions they live in. Donald comes into the picture as the Nutzi band, made up of some various Axis style members (a Japanese man, an Italian and some Germans) marches through his house to wake him up. Donald’s living conditions, where he has to spray essence of bacon and eggs into his mouth and saw off a piece of stale bread, are a great illustration of what happens in this sort of government. 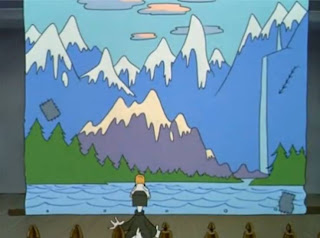 But the true reveal is when Donald ends up in the factory, trying to keep up the assembly line of shells going while still saluting Hitler any time his picture comes down the pike or whenever the PA system tells him to. There’s even the “vacation” which consists of a mountain backdrop falling for a moment before disappearing. The effect is a brutal condemnation on the effects of a totalitarian regime on the quality of life for the worker. Heady stuff for a cartoon, eh? 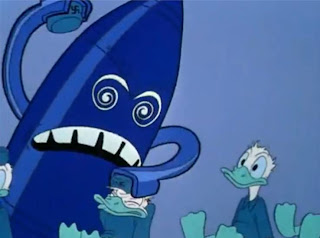 As the end comes near, Donald loses it, and the short devolves into a surrealist fantasy, with Nazi whistles, Donald being pounded as he comes down the assembly line. It all fades away to reveal a red, white and blue Donald in bed. It was all a dream!

Despite that, this is still a short I would hesitate to show to younger people or anyone who doesn’t understand the context in which it was produced. If you don’t know the mood of the country at the time, and the ignorance of Hitler’s deeds, then this short could seem very insensitive. Still, it’s one of the most ingenious and well animated shorts in Donald’s long career, so animation fans must view it at least once.