Oh boy, more Pluto has come around in Pluto’s Sweater.  This time, though, it’s an effective use of the character, as we get to see him going through all sorts of slapstick humor in an effort to rid himself of the titular sweater.  That is the way that Pluto should be used. 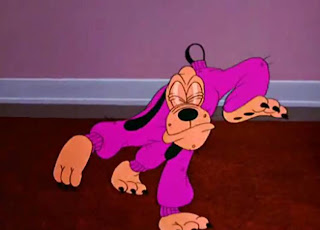 To back up, the central idea here is that Minnie has knit a sweater for our favorite pooch, and has forced him to wear it and enter the outside world.  That’s the basis for this short, with the added benefit of Figaro around to mock Pluto in his sweater.   I have never cared much for Figaro as a character, but if he’s going to be in a short, this is the best way to use him.  He shows up early, pokes fun at Pluto, then gets his comeuppance in the end. 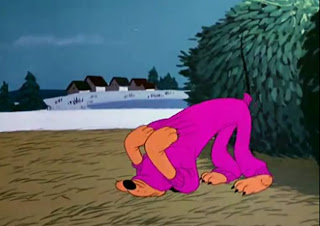 The majority of the short, though, takes place outside, where Pluto desperately struggles to get the sweater off, only making it more cumbersome in the process.  Again, Pluto isn’t my favorite, but this is a really effective way to use him.  The sweater sort of takes on the characteristics of Silly Putty, and makes this a really funny slapstick sort of humor. 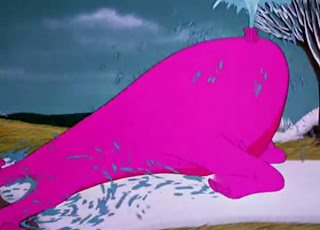 Having the sweater twist and transform into different shapes gives the animators the freedom to play with Pluto and other forms.  I especially like when he falls into the pond and comes out looking like a whale, but there are so many others.  The sweater gets turned into headgear, a midriff shirt and various permutations that are so clever that you just have to watch the short to get them all. 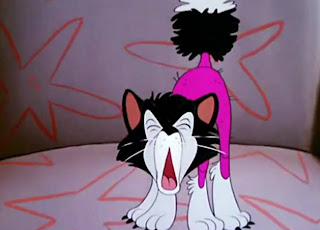 As I mentioned, Figaro gets his in the end, as Minnie sees the shrunken sweater and slips it onto him, causing a great consternation in the cat.  I’ve written before about how Pluto doesn’t work best when he is by himself, but this is the exception to that rule.  Giving him the foil of the sweater is a perfect way to let Pluto shine without the adversary taking the spotlight away.
Posted by Ryan at 5:04 PM