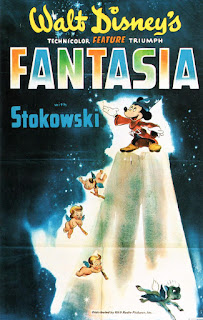 This classic from 1940 focuses on a set of symphonies where scenes are the background.  This is unlike the normal theme of a film where a scene is set to music.  As we know, music is the driving force of a film.  Fantasia magnifies the meaning of this by dedicating the entire basis around the power of an orchestra.

I don’t know about the rest of you but there is nothing that gets my heart racing like an orchestra tuning up before a concert.  The adrenaline rush that comes right before the instruments all begin to sound one by one is one of the best feelings in the world, especially if you are a music fanatic such as myself.

Throughout the film, a gentleman by the name of Deems Taylor narrates between scenes to present said scenes to the audience.  This brings the film to a very personal level and brings breaking the fourth wall to a comfortable level.  After all, this is not a typical movie.  This is rather a piece of brilliant art.  The conductor for all pieces is Leopold Stokowski leading the Philadelphia Orchestra.

The first segment of Fantasia is the Toccata and Fugue in D Minor, BWV 565 written by Johann Sebastian Bach.  We see silhouettes of the orchestra during the composition.  The medley of colors goes hand in hand with the intensity and mystery of certain notes.  For instance, the louder and more dramatic parts reflect the colors red and deep orange, while the lighter and brighter instrumentals reflect paler tones such as light blue.  The scene ends with Stokowski silhouetted against a sunset.
The second segment brings us Tchaikovsky’s The Nutcracker Suite, Op. 71A highlighting fairies and their daily lifestyle.  They spend their days covering nature in pixie dust.  The famous dancing mushrooms make an appearance during this portion as well.  Little flowers come alive and turn into petal ladies with dresses, and fish transform into silhouetted mermaids which makes for a neat transition.  Even more flowers appear and turn into dancing men and women wearing some form of elaborate headgear.  They just as quickly go back to their flower form after the dance.  We see more fairies reveal themselves, taking the shape of dragonflies and giving additional color to beautiful nature, while afterwards ice skating in tune to the melody.  The scene ends with dancing snowflakes parading across the screen.

For the third segment, Taylor introduces us to The Sorcerer’s Apprentice written by Paul Dukas.  This is the most famous of the scenes in Fantasia.  Mickey Mouse is portraying the sorcerer’s apprentice, who is watching his master perform sorcery before deciding to head to bed.  He leaves his magical hat on a table.  Mickey decides to put it on, bringing a broom to life to do his work for him.  He appears to fall asleep in a chair, dreaming of conducting a magnificent water orchestra, which may seem familiar to you if you have taken a trip on the Great Movie Ride in Disney’s Hollywood Studios (MGM for those of us who will forever call it that such as yours truly).  In the attraction you see Mickey in this very scene as you go through a windy portion…in fact it is so windy that my hair is known to look worse after this than after a trip on Space Mountain.  But back to business.  He awakens to find that the brooms have gone out of control and the building is basically flooded.  Mickey’s master wakes up and casts the water away as Mickey shamefully hands the hat back to him.  The scene ends with the sorcerer smacking Mickey on the bottom to shoo him out of the room.

The fourth segment gives us Igor Stravinsky’s Rite of Spring.  This is supposed to take place at the beginning of time, starting with bursting volcanoes and twirling lava.  We soon see the entrance of dinosaurs and sea creatures.  Once the tyrannosaurus rex enters, things get dangerous.  The music intensifies to build up to the fight scene between Mister T-Rex and the stegosaurus.  This looks very similar to a scene in Ellen’s Energy Adventure (Universe of Energy) in Walt Disney World’s Epcot park.  An earthquake comes about and destroys the dinosaurs afterward.  I have to be honest…this scene is not my favorite.  As much as I love dinosaurs, I’m a bit bored with this portion.

We have a “fifteen minute” intermission followed by a brief demonstration of various instruments being highlighted by onscreen changing shapes and colors.   This is the least elaborate scene of the film but it feels as though it is a breather of sorts in-between the dramatic elements.

Symphony No. 6 (“Pastoral”), Op. 68 by Ludwig van Beethoven accompanies us for the fifth segment of the film.  We are surrounded by an ethereal and mystical theme for this.  We begin by seeing colorful baby unicorns.  This part is a major cuteness overload, just to warn my fellow unicorn lovers.  We even see a delightful baby Pegasus.  Half human/half horse creatures emerge and the cherubs have a plan for uniting the males and females.  The scene goes a tad awry as a drunken man with purple grape-influenced headgear comes along and they celebrate him until a thunderstorm arrives to ruin the party.  The rulers of thunder and lightning are quite evil hoping to destroy anything and everything in their path.  The scene closes with a beautiful rainbow shining down on the land, followed by a sunset and a lady covering the earth in blue for night time.  This scene is a celebration of weather and changes in nature.

The sixth segment plays Amilcare Ponchielli’s Dance of the Hours from the opera “La Gioconda.”  We are surrounded by ballet dancing hippos, sneaky alligators, and curious elephants.  The main couple in this scene are Hyacinth Hippo (complete with tutu) and Ben Ali Gator.  This will make you smile if you are fond of Walt Disney World’s wonderful nighttime electrical parade in the Magic Kingdom called Spectromagic, which has been replaced by the reincarnated Main Street Electrical Parade.

The seventh and final segment stars good versus evil.  It begins with Modest Mussorgsky’s A Night on Bald Mountain.  We see the villain Chernabog awakening the dead to dance and celebrate evil.  This has been known to horrify children (and let’s face it, adults) of various ages.  It is highly disturbing which still makes me flinch at parts.  It brings to mind scenes from Spectromagic and the nighttime show at Disney’s Hollywood Studios known as Fantasmic!  The tone changes quickly with the sound of church bells as Franz Schubert’s Ave Maria, Op. 52 No. 6 begins to play.  We see silhouettes of individuals singing, holding lanterns as they walk on to celebrate peace and joy.  The sun’s rays close Fantasia.

The live action portion of the cast is rather small since the only actual humans we see are Deems Taylor, Leopold Stokowsky, and the Philadelphia Orchestra.  However, this seemed appropriate since the film is not focused on acting or a storyline.  It rather focuses on the brilliance of animation and how music drives a scene so powerfully.  Fantasia is directed and written and directed by a ton of individuals according to the scene you are speaking of.  I would strongly suggest listening to the podcast episode to hear more as well as heading over to IMDb for a complete list.

FIVE FACTS:
1.)  This was the first American film to use stereophonic sound; it was also the first film to be recorded in a form called Fantasound.
2.)  In 2008, this was marked as #5 on the American Film Institute’s list of the ten greatest films in the genre of animation.
3.)  This is the first major Hollywood film to be released with no written credits appearing onscreen despite the title and intermission title card.
4.)  The character actress Ruby Dandridge performed as the live-action reference model for Hyacinth Hippo during the Dance of the Hours sequence.
5.)  This is the longest Disney animated feature, running at 124 minutes.

For this film, it is difficult to choose a favorite scene especially since this is broken down into extremely different segments.  However, I love the Sorcerer’s Apprentice scene as well the emergence of the rainbow during the Symphony No. 6 scene.  The way the unicorns and cherubs bounce along the rainbow and use it as a slide is precious and a beautiful way to utilize the animation.

Fantasia is in a category of its own.  It is not a favorite film of many but it is certainly a respected one.  Being it does not have a particular plot or storyline, it is nontraditional and I admire that.  The imagination put into this is absolutely phenomenal.  We see creatures and characters in ways we could never picture on our own.  In my opinion, children may enjoy this for the cute characters but will not fully appreciate it for what it is until they reach young adulthood.  There must be somewhat of an appreciation for the arts in order to enjoy what is placed before you with Fantasia.  I absolutely recommend this and am consistently honored to witness its beauty each time.

Posted by BufferflyBrie at 9:00 AM