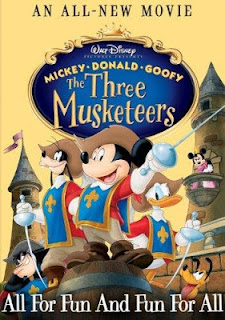 This brief, animated re-telling of the three famous heroes stars Mickey Mouse, Donald Duck, and Goofy.  Believe it or not, this is from 2004 which is frightening since this feels like it just came out two years ago.
Unlike the typical tale (or tail, in this instance) of the film, their version is a tad different.  I will summarize their adventure.  Mickey, Donald, and Goofy are janitors who are looking to be heroes…Musketeers, to be specific.  It is refreshing to see a classic villain by the name of Pete as their enemy.  He stars as Peg-Leg Pete who believes none of them will ever make it to the big leagues.  He is so passionate against their success that he has terms for each of them – he deems Mickey as “just too small”, Donald as a “coward”, and Goofy as a “doofus.”  As a matter of fact, there is a funny scene where to demonstrate his point, Pete puts his ear up to Goofy’s head to see if it’s working, and a busy signal sounds with the familiar “number you are trying to reach” message.  That will bring a laugh for adults.

Pete has a mission to kidnap Princess Minnie although his true goal is to do the exact opposite.  His league of dummies called The Beagle Boys have misunderstood Pete’s order to keep her safe and instead attempt to drop a safe on the unsuspecting Minnie.  Thankfully, their plan does not work out.  So Pete plans to take his revenge during The Pirates of Penzance when he will display his mighty strength.  Princess Minnie informs Pete that she would like bodyguards, so he hires Mickey, Donald, and Goofy for her protection.

A bit of chaos takes place once the gang is attacked by the Beagle Boys.  Minnie and Goofy are kidnapped, so the wannabe Musketeers know they must rescue them.  After a fun tower scene, the Beagle Boys get knocked off and the ladies are saved.  Mickey and Minnie obviously fall in love.  Pete soon acknowledges the fact that these three friends are stronger than they appear and that “small”, “coward”, and “doofus” do not apply at all.  After more chaos including a fabulous appearance from Clarabelle, the film ends with a bang on a stage during The Pirates of Penzance.  Of course, the film ends on a positive note.

Mickey and Minnie are voiced by the incredible Wayne Allwine and Russi Taylor.  Allwine voiced Mickey from 1973 to 2009.  Taylor has voiced Minnie since 1987; she has also given us Strawberry Shortcake and currently provides voice work on the Disney show Jake and the Never Land Pirates.  Allwine and Taylor were married, which makes the whole concept absolutely magical.  Tony Anselmo gives us Donald Duck and has been since 1986, while Bill Farmer has voiced Goofy since 1987.  Jim Cummings voices Pete, and has provided us with a countless number of character voices through the years.  Tress MacNeille plays Daisy and April Winchell voices Clarabelle.

The Three Musketeers is directed by Donovan Cook.  Cook has directed a few other titles including two episodes of Mickey Mouse Clubhouse.  Evan Spiliotopoulos and David M. Evans wrote for the film.  And of course, some credit must go to the man himself, Alexandre Dumas.

FIVE FACTS:
1.)  Pete uses his peg leg for the first time since the 1930s.
2.)  The original idea for the film came about in the 1940s but Disney realized there needed to be four heroes, not three.  They realized in 2004 that they could make a film which could parallel the story to tell an interesting tale in homage of the original.  Successfully done.
3.)  This is the first feature length film with Mickey, Donald, and Goofy together.
4.)  Goofy is the only main character to not appear in his traditional outfit.
5.)  Hidden Mickey: a flashing emergency light.

I do not have a favorite scene during this film but the entire ending scene on stage during The Pirates of Penzance is quite comical.  There is also a nod to The Mickey Mouse Club where Pete announces at one point, “Hey there, hi there, ho there, you’re as welcome as can be.”  There is also an “I just can’t wait to be king” thrown in there.  Also, I noticed how much of this film brings back memories from House of Mouse (from 2001 and 2002), the fantastic Disney Channel television series.

The Three Musketeers is a fun film.  It’s a great one to check out at some point with the family when you have spare time.  It is no Beauty and the Beast or Aladdin, but it is worth watching.  Definitely not a top notch Disney flick, but certainly a fun one.

By the power invested in my fist, I clobber you.
Posted by BufferflyBrie at 9:00 AM