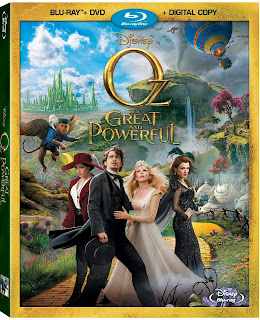 Back in Episode 115 of the podcast we reviewed Oz the Great and Powerful, and since that time I have eagerly awaited being able to own a copy for my home video library.  Now, with the release of the Oz The Great And Powerful on Blu-ray Combo Pack, that has happened.  And I’m excited to tell you that this is one of the best Blu-ray releases to date this year.  It is packed with some very solid and enjoyable content, and it was enough to distract me from sitting down to watch the movie.  Sadly this means that I haven’t had a chance to look at the Second Screen app for the iPad, but I did have time to look at all of the bonus features.

Walt Disney and the Road to Oz
This is a documentary about Walt Disney’s long road to trying to create a Wizard of Oz movie.  Starting with the 1957 announcement of the Studio’s creation of the live-action film “The Rainbow Road to Oz”, that was to star the Mouseketeers.  We take a step back to the late 1930s, when Walt originally tried to acquire the rights to the Oz books, and that he missed out, and that it wasn’t until 1954 that he was finally able to purchase the rights to 11 of the Oz books.  Eventually though the original project was cancelled and transformed into “Babes in Toyland”.  After this we learn about the conceptualized, but never completed, “Candy Mountain” addition to the Storybook Land attraction at Disneyland.  It wasn’t until the 1980s with “Return to Oz” when Disney, without Walt, finally produced a live action Oz movie.  All of this leading to the creation of “Oz the Great and Powerful”.

My Journey in Oz by James Franco

We’re presented with a documentary by James Franco about the people who worked on Oz the Great and Powerful.  It’s an array of discussions with Sam Raimi, Mila Kunis, Michelle Williams, Zach Braff, and James himself.  Raimi discusses some interesting background for the origins of the movie, and we learn how Mitchell Kapner was asked by the producers to write the story of the origins of the Wizard himself after learning that Kapner was in the middle of reading the Oz books to his children.

China Girl and the Suspension of Disbelief

Joey King, the voice of China Girl, along with others from the film like Zach Braff (Finley) talk about how the movie brought the character to life.  We learn that Sam Raimi wanted the character to be done using a marionette and how Phillip Huber went about creating it.  We learn that having an actual physical puppet to use on set allowed for the performances of the other actors to be more natural when interacting with China Girl.  We learn how the faces of both King and Braff were filmed while voice acting and then transformed on the faces of China Girl and Finley using CGI.

Before Your Very Eyes: From Kansas to Oz
We learn about how Robert Stromberg helped bring about the Land of Oz depicted in the movie.  Along with with a group of other designers they spent six months of discussions with Sam Raimi to get a direction to take the look and feel.  From scouring the original L. Frank Baum books to get the original basic feel to drawing elements from classic animated Disney works like Snow White, Bambi, and Pinocchio.  Through his knowledge of both set design and CGI he was able to bring about a world that consistent, complete, and unified.

Mila’s Metamorphosis
Mila Kunis and Howard Berger walk us through Mila’s transformation from Theodora to the Wicked Witch of the West from a Special Effects perspective.  Berger talks about how the process of putting on the facial prosthetics works, and how sometimes “old school” simply works best.  And how they worked together with Sam Raimi to create the look of “Wicked Theodora”.  Berger goes into how the coloring of Theodora is based on the old Boris Karloff Frankenstein makeup, and it is broken down into 5 colors named “Theo Stein” 1 through 5. From there costume designer Gary Jones, Berger, and Raimi, all chime in on how Mila really helped bring the character to life.

Mr. Elfman’s Musical Concoctions
Danny Elfman starts us off by discussing how Sam Raimi first contacted him about the film, and gave him his usual pre-production pep talk about the music.  He goes on to tell us about how the waltz “Fireside Dance” was the first piece he wrote for the movie because they need it to set the mood while filming.  He was amazed a year later when he started seeing production footage at how the piece had followed Theodora through the story.  And how he later transformed it into a more “evil” sounding version to go along with her own transformation. He explains that normally he scores the opening piece of a film and then some scenes in the middle before doing the end score.  However Oz was different, he scored the ending scene first and it became the theme for the movie.

Bloopers
This is the weakest of the additional content on the Blu-ray.  The reel is not laugh out loud funny, but there are some cute things in it such as Tony Cox blowing Knuck’s horn terribly prior to sound editing.