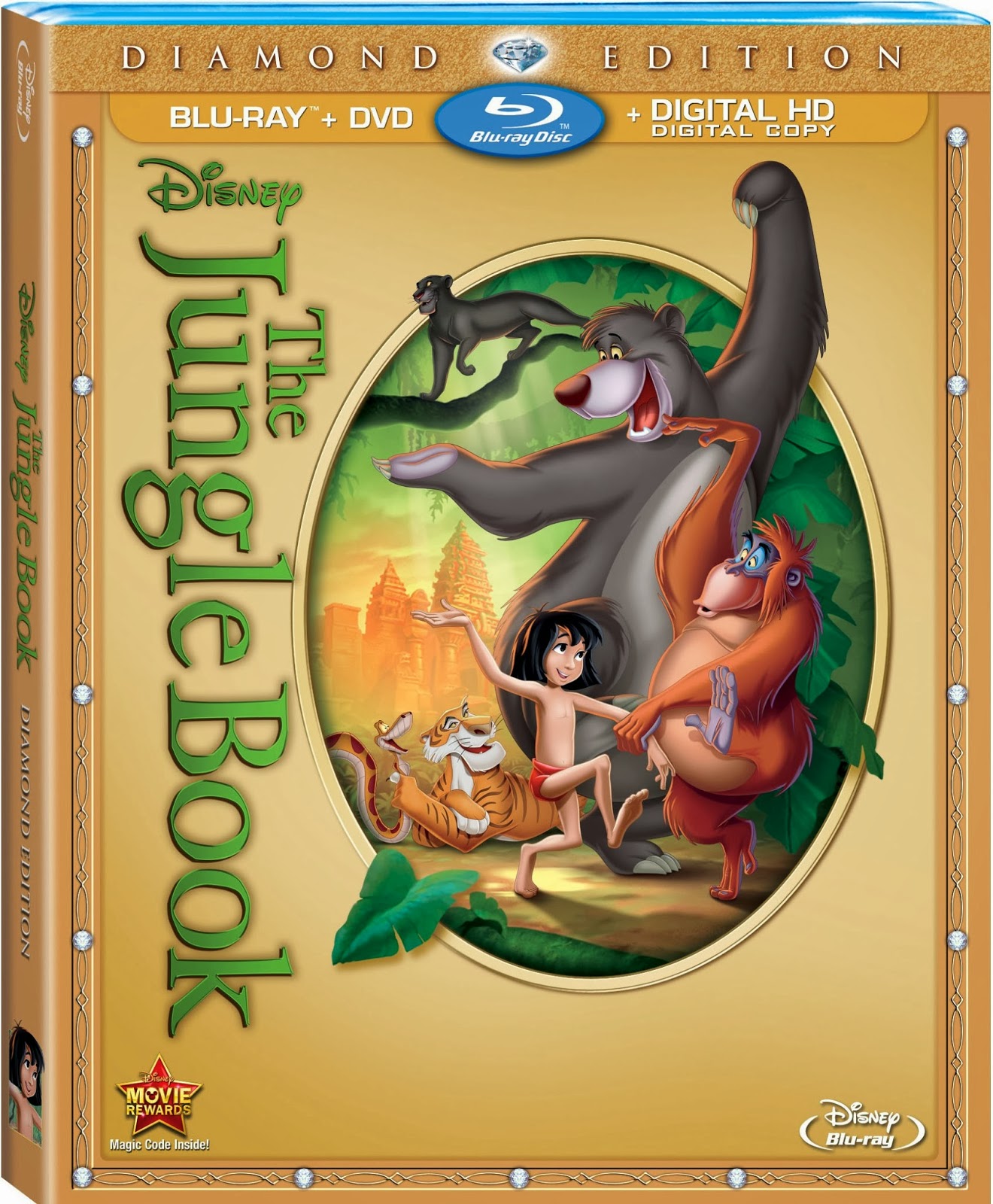 Based on the book by Rudyard Kipling, the movie The Jungle Book is the last animated feature worked on by Walt Disney before his death as he died during production. Like many of the animated Disney features it has a timeless appeal and is a favorite of many fans both young and old. It tells the story of Mowgli the abandoned “man-cub” and his adventures in the jungle while growing up there. Now with the February 11th release of The Jungle Book Diamond Edition, you can own a digital and audio remastered version of the movie. If you’d like more information about the movie itself please listen to Episode 54 of our podcast.

The animated menu moves through some simple screens of the main characters either dancing or looking villainous - it’s not complex or long, but a moving vibrant menu is so much better than a static one. One thing I noticed is that it is hard to discern which menu item is selected as the selection is only mildly brighter than the rest of the menu. The blu-ray has a sneak peek trailer for the upcoming Sleeping Beauty Diamond Edition scheduled later this year as well as all of the classic bonus features that were part of prior releases of the movie.

Once again, Disney offers up my favorite Blu-ray feature, Disney Intermission. This time it’s called Bear-E-Oke Sing-Along which provides a few karaoke songs that are introduced to you by Baloo. You can listen to and sing along with:


One of the primary bonus features is Music, Memories & Mowgli, which is a discussion about The Jungle Book hosted by Richard Sherman, Diane Miller, and Floyd Norman. It takes place inside the Walt Disney Family Museum, and much of the discussion centers around Walt’s skills as a great storyteller. The talk about how he had this almost magical attunement to voices when he was casting movie roles. Norman and Sherman discuss their roles on the film, and how Walt’s plan was to have the Shermans smooth over otherwise scary points in the movie with music. And of course they touch on how Walt passed during the movie. You can also play the movie with introductions by Diane Miller or Richard Sherman.

An alternate ending to the movie is provided titled Mowgli and the Hunter. It is based on a treatment for an alternate ending was found, but never used. The studio had it storyboarded for the Blu-ray, and the ending provided is a walk through of the storyboards. It involves Mowgli going back to his family prior to killing Shere Khan and how he makes enemies with a hunter in the village. Eventually the hunter and Mowgli face Shere Khan and only Mowgli survives becoming a hero of both the village and the jungle.

@DisneyAnimation: Sparking Creativity, talks about a program at Disney Animation called Spark. We learn that this program is a platform where animators are able to present new ideas and inventions to others in the studio. We get to see some of the projects being worked on and presented. It’s a nice way to see how Disney helps foster creativity.

The last feature on the Blu-ray is I Wan’na Be Like You: Hangin’ Out At Disney’s Animal Kingdom. In this teen stars Blake & G from Dog with a Blog are treated to a behind the scenes tour of Disney’s Animal Kingdom. In it you can see them prepare food for the animals and then later setting out food for animals to eat. Park fans will recognize some of their favorite attractions like the Kilimanjaro Safari.

If you’re a fan of this movie, and like myself were disappointed in the video and audio quality of prior releases then you’re going to be quite pleased with this release. The picture is brighter and much more clear and the sound is clean and crisp. I really enjoy the nostalgic energy of the discussion between Floyd, Miller, and Sherman, as well as the piece about creativity at Disney Animation. This is welcomed release of this great classic Disney film.