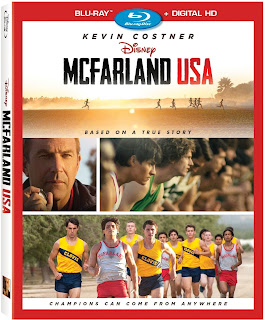 Now on Blu-ray, McFarland, USA is the inspirational story of the town of McFarland, CA, and how it became a town that, while heavily tied to agricultural farm labor, is able to inspire it’s youth to achieve more.  The story revolves around Coach Jim White a.k.a. “Blanco” and how his starting a track team and eventually leading them to the California State Championships brought about this transformation in McFarland.  If you’d like to learn more about the movie itself and it’s story you can listen to Episode 219 of the Disney Film Project Podcast.

The contents of the Blu-ray are few, and focus mostly around the inspirational message of the movie.  With a story that is so rich and full it might have been nice to have some of the background reporting that has existed for many years about McFarland, but I can at the same time see how this might have been considered a divergence from the movie itself.  Here’s what you will find:

McFarland Reflections is a look at the adults who comprised the real life McFarland team.  How actor Kevin Costner learned about the town, school, Coach White, and their story from an article in Sports Illustrated. They talk about brotherhood, growth, and belief, and how Coach White helped them believe in more than just the life they had.  How they it wasn’t just them that were inspired by what he taught them, but that the town was inspired too, and how it changed, and also grew.  They talk about how they all came back to the town and the school in their adult lives to give back to it, and continue to help it grow and evolve to inspire future generations.

Juntos is a music video of a song by Colombian musician Juanes that was made for the movie McFarland and performed at the 2015 Grammy Awards.  Juntos means “together”, and is, as you might expect, a song about togetherness.  It was shot on location in McFarland, where he can be seen performing for the town, meeting the townspeople, and running with the actors who played the team members in the movie.

Inspiring McFarland is a quick short that is a good teaser for the film itself and its message.  In it, Kevin Costner, Niki Caro, Jim White, and the actors who play the boys talk about how the story of McFarland is inspiring.  How inspiration can breed success, and how the story portrayed in the movie set a standard in the town of McFarland that lives on to this day.

This is a great Blu-ray release for fans of the movie, the story, both, or for people who missed the movie and would like to see it.  It does come with a digital copy that works with Disney Movies Anywhere which provides additional content not found on the Blu-ray.  It’s a great movie to watch with family, and one I really enjoy.