Pluto and the Gopher

Do you think Pluto ever gets tired of being the guard dog for darn near everything in Disney shorts?  I mean, he has guarded sheep, other dogs, bones, cars and now flowers in Pluto and the Gopher.  Does the guy ever just get a day off to rest and enjoy the spoils of his work?  I'm guessing not, and I don't think we would have it any other way. 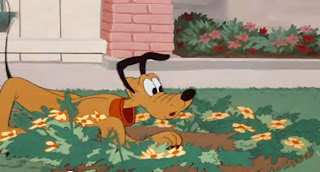 In Pluto and the Gopher, he is guarding Minnie's flower beds from the titular gopher, and hilarity ensues.  This could have easily played out exactly the same way as every other Pluto short, with him taking on another animal in a series of vaudeville style gags, and for the most part it does.  That's not to say that formula is a bad thing, as it served to make Pluto the star he was.  But in this short, there's a nice twist that freshens things up a bit and makes this slightly more memorable than other Pluto shorts. 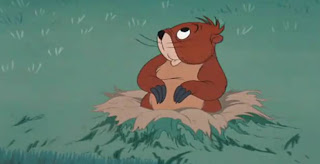 Rather than have Pluto chase the gopher through the gardens and demolish them, as I was expecting, we get the gopher going inside the house, which leads to fine comedy in the tradition of Tom & Jerry.  That was what I kept coming back to as I watched, was how much this was like those MGM cartoons.  Instead of a cat, though, it's Pluto and instead of a mouse, it's the gopher.  But the rest of this is very similar, with Pluto chasing the gopher down hallways, knocking things over, and generally causing chaos. 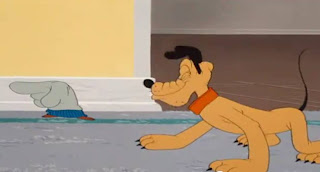 It really sunk in when I saw the gopher using a glove to point the way to Pluto as our favorite dog rolled past in the direction he thought that the gopher had gone.  I could easily have seen the same thing happening in a Tom and Jerry short.  It's that sort of different twist that makes Pluto and the Gopher different from the other Pluto shorts.  Let's be honest, after a while it's hard to come up with new ways to torment the poor dog. 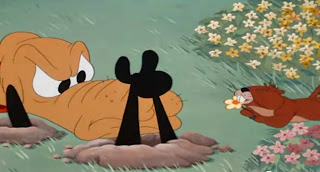 Early on in his career, Pluto had some more inventive shorts, like Pluto's Judgment Day, where the torment was not based on other animals but more on the circumstances around him.  While Pluto and the Gopher is not formulaic, it's still in the same vein as the other shorts by Pluto we have seen in the late 1940s and now 1950.  If I were watching the shorts at this time, it would have seemed that Disney was a little bit out of steam.  But they were about to change things competely with a feature film that would revive the studio.
Posted by Ryan at 10:00 AM