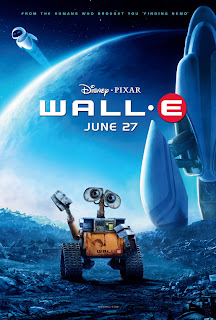 It’s a busy summer here at the Disney Film Project, with new podcasts, blogs about the 1950s (stay tuned for , and more) and Tweetwatch!  So, tonight, we get to WALL-E, the Pixar film directed by Andrew Stanton about the end of the world!  Or is it the beginning?  We can have that philosophical debate later.  For now, make sure you join in the fun tonight as we watch WALL-E together and comment about all the weird, wacky stuff in the film.  Plus, it’s a great way to get ready for the next Pixar masterpiece Brave, which opens Friday, June 22.


If you've never joined Tweetwatches before, it's super easy to do. Here's the plan:

1. Get the DVD or Bluray so you can watch with us. Netflix, Redbox, whatever you need to do.
2. Tonight at a little before 8:30, head over to our Friendfeed room.
3. At 8:30p ET, I'll tweet out the signal to push play, and we'll watch the movie together, while I fill you in on some of the little known facts about each film.

It is tons of fun, and I really enjoy doing them, so make sure you join the fun tonight at 8:30p ET.  Look forward to seeing you all there!