Around the World in 80 Days Review by Briana Alessio

It is with heavy heart that we acknowledge the loss of Nolan Woodall, a wonderful member of the Disney community.  Our prayers, love, and thoughts go to his family at this time.  Give Uncle Walt a hug for us, Nolan. 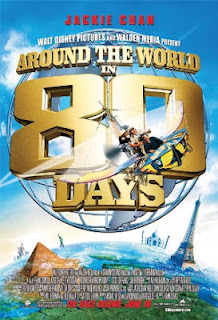 Made in 2004, this film is a remake from the original 1956 film with David Niven.  Let me say to begin with that I have never seen the original.  Therefore, the comments I make throughout this post are my personal opinion based purely on the 2004 version which we are reviewing this week.

During the first part of the film, we see immediate chemistry between Passepartout and Fogg.  From here, I realized this would be a highly enjoyable experience…and I was right.  The directors, producers, and everyone involved deserve a great big hug for this.  Although much of the scenes are downright silly and unrealistic, that is the beauty of the film.  When an actor can pull off silliness and make it exquisite using his own unique style of acting, this is sheer talent.

Quick Disney reference here – at the beginning when Fogg’s experiment of human speed lands Passepartout on the little train coaster, it reminded me immensely of a spinny version of The Great Goofini coaster (formerly Goofy’s Barnstormer) in the Magic Kingdom of Walt Disney World.  The writing in this film is literally out of this world, especially because the lines are spoken by individuals who can make their point through their characters.  For instance, when Fogg brings Passepartout into his device room, Passepartout calls Fogg’s flying machine “a giant moth.”  Thankfully, he brought just the right amount of naivety and brilliance to emit a compassionate, truly awesome presence.

There are SO many fun lines I would love to mention, but I will surely run out of room.  Therefore, I will name only a few.  Passepartout’s description of “red headed, elderly Norweigans with tiny feet” being the thieves, Vincent Van Gogh’s hearing (with one good ear only, mind you) Fogg’s comment about the lack of talent among the artists, and the absolutely hilarious scene of La Roche catching Fogg in the act of staring at her legs, which have on stockings that resemble something a French maid might wear.  When Fogg sees she is watching him watching her, he is alarmed, resulting in his knocking over a table.

The cast was a delightful one.  Jackie Chan played Passepartout/Lau Xing, the Chinese thief.  Chan does not have many Disney titles under his belt, as he is more prone to martial arts films or comedies like 1998’s Rush Hour.  Steve Coogan portrayed Phileas Fogg.  Coogan is a witty actor who is normally involved in British comedy, although he did play the hilarious Octavius in 2006’s Night at the Museum.  Cécile De France (highly appropriate last name) played Monique La Roche.  De France has not appeared in a large number of American films, although she did star alongside Hereafter starring Matt Damon (parental guidance required, if you please).  Jim Broadbent plays the delightfully evil Lord Kelvin; he has portrayed the role of Professor Kirke in 2005’s The Chronicles of Narnia: The Lion, the Witch, and the Wardrobe, in addition to countless assorted films.

Although each character in this film is worth mentioning, I do not have nearly enough space.  Let me just add here that there were also guest appearances by various actors.  No big deal though…only Kathy Bates, Arnold Schwarzenegger, Macy Gray, Luke and Owen Wilson, and Rob Schneider.  We cannot forget John Cleese, Mark Addy, and Richard Branson, among others.  So as you can see, highly unrecognizable names were involved in the making of this picture (read this sarcastically).  My favorite of the guest actors was actually Rob Schneider.  His reaction to Fogg’s scanning through the book with “don’t be putting a hex on me!  I’ll cut ya!” left me laughing right out loud.

The director of this film is Frank Coraci.  Coraci has also directed 1998’s The Wedding Singer and 2011’s Zookeeper (parental guidance required for both of these films) among others.  The music was also fun in this film, and appropriate for the scenes.  “Everybody, All Over the World (Join the Celebration)” was the highlight song of the film, which was sung by David A. Stewart and the Sylvia Young Stage School and written by Stewart, Chucho Merchan, and the director himself, Frank Coraci.  I will admit to gasping a tad at the addition of the Baha Men’s version of “It’s a Small World”, originally written by the fantastic Sherman Brothers.  At first, I wondered why a song like this would be in a film like this…but then it all makes sense.  Think about it.

My favorite scene…is not one I can choose.  The whole film is my favorite scene, if that makes any sense.  I could never choose one thing, as its entirety is fabulous.  The role of favorite character would have to go to Phileas Fogg, as his compassion and humor just cracked me up throughout every scene.

I would explain more about this film, but in doing so, I would write an extremely large post which no one in their right mind would want to take the time to read.  Therefore, I will simply tell you that for your own good, please see Around the World in 80 Days.  Please.  It is laugh out loud comedy, and we need more of that in this world.  There are a couple small moments of crude humor, but it is more than likely that your child will not catch on anyhow.  It is, for the most part, good clean fun.  Highly recommended!

Well done, Salisbury!  I shall name a beef-based entrée after you in your honor.
Posted by BufferflyBrie at 9:00 AM