Donald versus the chipmunks has, at this point in Disney’s history, become a standby for the animation team.  And somehow, it always revolves around food.  Chip and Dale are looking for something to eat, Donald has it, and hilarity ensues.  Eventually it all comes back to this, and the excitement is in seeing how they pull it off.  Are there new gags?  Does the interaction between the three entertain more or less than other chipmunk shorts? 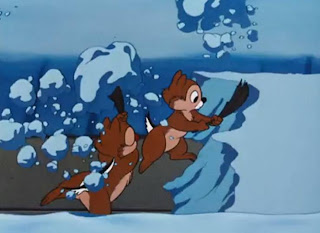 With Corn Chips, the food item in question is popcorn and the answer to the above questions is a definite yes.  The popcorn actually adds a dynamic element to the short, leaving this one with lots more movement and fun than other recent Chip and Dale shorts.  It even starts with a great gag of both Donald and the chipmunks trying to shovel their respective driveways.  Donald’s is of course his actual driveway, while Chip and Dale try to shovel the branch above that very same driveway.  Donald manages to trick them into doing his walk simply by picking them up on a shovel and changing where they’re shoveling. 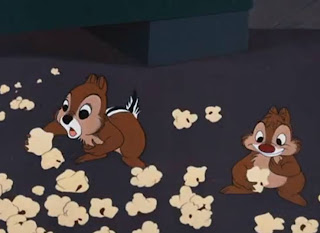 The fun really gets going, though, when the chipmunks discover the wonder of popcorn.  This is a short that brings back memories, as it shows Donald popping actual corn kernels over a fire, which some of us may be old enough to remember.  Before the microwave, this is how we popped popcorn, kids!  It definitely took me back to childhood while watching this, especially the sense of wonder that Chip and Dale had as they viewed the transformation between kernels to popped corn. 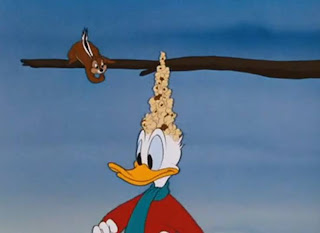 The ensuing fight over the popped kernels follows a fairly predictable path, with Chip and Dale running out of Donald’s house with the popcorn and the Duck chasing them trying to get it back.  There are some new things here, though, like the chipmunks tying up the popcorn in a little ball in Donald’s hat and turning it into a football.  Watching them run up and down the driveway and toss the “football” back and forth while some collegiate pep band music played was the laugh out loud moment of the short. 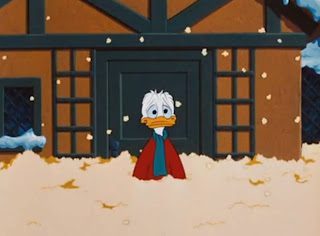 That said, then there was the obligatory Donald chasing them up their tree and out onto a shaky limb.  That’s okay, as it ends up with a fun climax of Donald trying to smoke the chipmunks out which only turns into an opportunity for them to pop an insane amount of popcorn on the fire he provided.  The end shot of popcorn surrounding a despondent Donald Duck is a fine example of how these shorts work.  The two parties are fighting back and forth, but in the end, it’s Donald’s arrogance and lack of forethought that undoes him.  That’s a winning formula.
Posted by Ryan at 2:54 PM