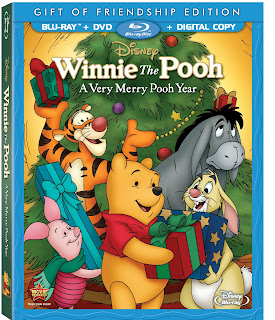 Winnie the Pooh: A Very Merry Pooh year was released in 2002 by Walt Disney Animation in France. It contains a short titled Winnie the Pooh and Christmas Too that was done with the intention of being both a finale and homage to the television series The New Adventures of Winnie the Pooh. Due to the recent release of this film on Blu-ray - the subject of today’s post - our podcast will be covering this movie in Episode 153 to be released on December 9th.

Overall there’s not a lot to be said about the Blu-ray itself. The video quality is about what you’d expect. And the movie itself, like its original DVD counterpart is designed to be watch as a sing-a-long experience for children and their parents. By default this feature is not turned on, but you can easily enable it.


The one thing that puts this Blu-ray above the DVD version is that it has its own version of Disney Intermission - a feature I feel that every Blu-ray coming from Disney should have. With this feature your children can learn some math with Rabbit, help Pooh with finding Piglet’s present, bounce along with Piglet, dance along with a “happy” Eeyore, etc.