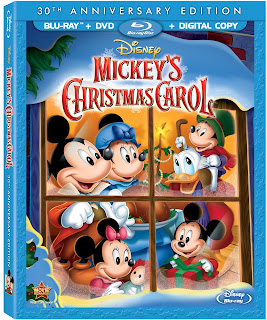 Mickey’s Christmas Carol is an adaptation of the Charles Dickens story A Christmas Carol. It stars Mickey Mouse as Bob Cratchit and Scrooge McDuck as the character that inspired him: Ebenezer Scrooge. In the United States, it was originally released in theaters along with a re-release of The Rescuers. At the time it had been Mickey’s first animated theater appearance in more than 30 years. And it was the last time that Clarence Nash voiced Donald Duck. Now 30 years later you can take home the new 30th Anniversary Blu-ray.

My largest complaint about this Blu-ray is that the menu is incredibly difficult to use because of the color choices. The selections have been placed on a brown parchment and are colored a very dark red. The selected item is black, and the two colors are barely distinguishable from each other. This is certain to frustrate many.

It does however contain my favorite Disney Blu-ray feature: Disney Intermission. Here you can sing Christmas Carols with Mickey and the gang. Included are “Wish You a Merry Christmas”, “Jingle Bells”, and “Deck the Halls”. Also included on the Blu-ray are the following shorts: