Development of The Adventures of Ichabod and Mr. Toad

As 1949 draws to a close soon in our meandering path through the Disney films, we come upon the end of an era for Walt and the studio.  It has been years since the last full length animated feature film and that does not change until 1950.  Since 1942’s Bambi, the Disney studio turned their focus to shorts, war materials during World War II and the so-called “package” features, where a group of shorts that were not considered enough material for a full film are packaged together and served to the public as the latest Disney feature. 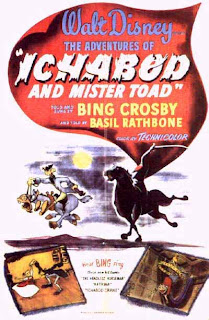 The last, and perhaps best, of these is The Adventures of Ichabod and Mr. Toad, which took a long and torturous route to the screen.  Work first began on adapting Kenneth Grahame’s work A Wind In The Willows back in the late 1930s.  The book was a spoof of British aristocracy, masked as a children’s book about anthropomorphized animals.  It was brought to Walt’s attention after Snow White was such a huge success, along with nearly every other kid’s story known to man.
Walt was not entirely convinced, but bought the rights to the story anyway and set some of his story men to work on it.  Script work was completed in 1941, and a reel was completed along with some dialogue on some initial story concepts.  It was apparently not good, and Walt shelved the project only to be interrupted by World War II.  Many in the studio wondered if A Wind In The Willows would ever be started up again.

Toad/Cyril sketch from Van Eaton Galleries
It wasn’t until after the war in 1945 that work resumed on A Wind In The Willows, but this time the story was shortened and it was intentionally put into work as part of a package feature.  The initial concept during the war was to put this short together with Mickey and the Beanstalk and a short based on The Gremlins, a concept by author Roald Dahl.  However, The Gremlins never got off the ground, and was shelved in 1943.  The intended package film was titled Two Fabulous Characters after Mickey and Mr. Toad.
Once Bongo came along, however, it was determined that the story of the circus bear was a better project and fit better with Mickey and the Beanstalk, and the two were released together as Fun and Fancy Free in 1947.
Still searching for material to make the Mr. Toad project work, in late 1946 Disney acquired the rights to make a version of the book The Legend of Sleepy Hollow, by Washington Irving.  It was determined that this would be a good pairing for Toad and friends, and the Two Fabulous Characters title was reborn, this time pointing to Toad and Ichabod Crane, the hero of Sleepy Hollow. 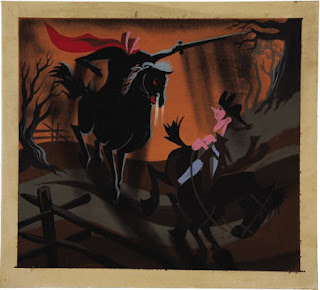 Mary Blair concept for Sleepy Hollow, courtesy of Dipity.
The work of the Disney studio’s finest animators was on display in the film, as Frank Thomas, Ollie Johnston, John Lounsberry, Ward Kimball, Milt Kahl, Woolie Reitherman and Eric Larson all contributed to the finished product.  As such, the animation was top notch, and audiences responded when the finished film was released as The Adventures of Ichabod and Mr. Toad in October of 1949.  It became the hit film that Disney needed and has been a perennial favorite since the segments were broken up and re-released in the late 1970s.
Tomorrow, we’ll look at the film itself and see the brilliance behind this Disney classic.
Posted by Ryan at 9:58 AM