I guess it’s appropriate that with baseball season upon us, today’s review focuses on a baseball themed short from Disney – Slide Donald Slide.  Once again, we are looking at a short that doesn’t focus entirely on the main character.  In this case, Donald shares screen time with a bee that we’ve seen antagonizing him before.  This time they are fighting over the radio. 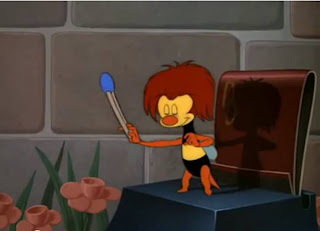 Our friend the bee is looking to be a famous conductor, and tries to turn the radio to classical music to help him live out his dreams.  The only issue with that is that it happens to be the day of the opening game of the World Series, and Donald wants to listen to the game.  The war over the radio begins when the bee keeps changing the channel, but keeps going far beyond that. 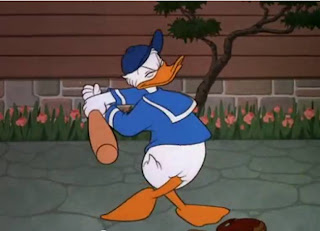 This is an interesting back and forth and makes for an entertaining short, since it’s a mixture of traditional Donald gags and some different and fun ideas using the bee.  We see Donald acting out the games he listens to on the radio, which all by itself is pretty funny.  But the metaphor gets extended further with the bee taking on an umpire role at the end of the short.  He even sends Donald to the showers when Donald argues a “call” made! 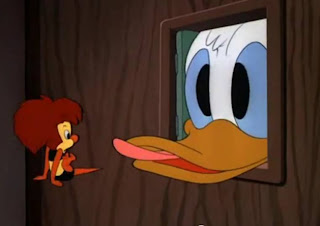 Those baseball scenes are the core of the short, and that makes for a lot of fun.  The other side of the coin, though, are the little battles over the radio dial.  Those are the same back and forth that we have seen Donald go through in many other shorts, where he attacks and is attacked in ever increasing gags.  My favorite in this short is where the bee attempts to sting Donald and ends up chasing him inside away from the radio.  Other than that, though, the give and take is not as compelling. 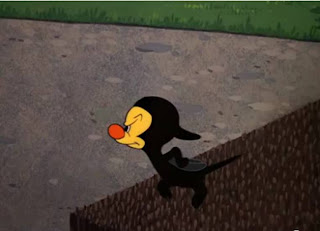 In fact, there is a bit of a mean streak to Donald that is above and beyond the other evils he has committed in other shorts.  He rigs up a faux radio that will explode when the bee changes the channel, and then proceeds to allow the bee to blow up.  That sequence was a little disturbing and not quite in keeping with the character in the past.  Despite that, Slide Donald Slide was a clear improvement from the other 1949 shorts I have watched recently.
Posted by Ryan at 12:01 PM