Once again in 1949, Disney produces a short that is theoretically part of their ongoing series of shorts, but in actuality is playing with different characters.  In Sheep Dog, Pluto is the “lead” but the focus is really and truly on a wolf and his cub who are attempting to eat the sheep guarded by Pluto.  They are the real stars of this short, and the ones that make the action go. 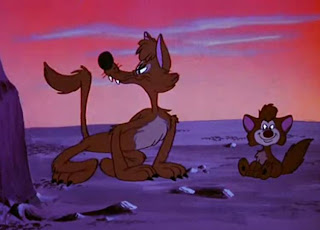 It’s an interesting question as to whether Disney at this point was running out of ideas for shorts, since so many elements of this refer back to other shorts and don’t focus on Pluto.  After all, we’ve seen Pluto in the Southwest before, guarding other animals a few times before and he’s fought with other animals quite a bit.  This one is about the wolves attacking Pluto’s sheep, and seems rather unoriginal. 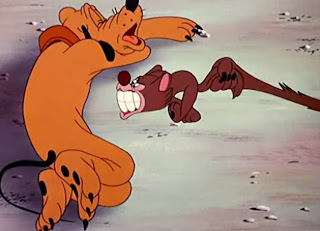 The little cub adds a slightly new element to the mix, with his zeal to go after Pluto and the way he becomes part of the older wolf’s schemes, such as dressing up like a sheep.  That was the best part of this short, watching that younger cub go through the ups and downs as he and his father try to get the sheep.  The animation on the younger cub is quite good, both from the design and the emotions visible on his face. 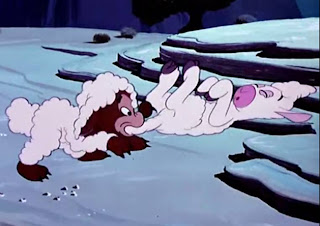 It’s not really until after the midway point of the short that Pluto becomes a factor.  The wolves wake him up, and he disguises himself as a sheep to make sure they don’t come near the sheep again.  Instead, Pluto the sheep gets taken and into a chase sequence with the larger wolf.  If all of this sounds like something you’ve seen before, you probably have.  This is a short that Disney runs quite often, although it’s not one of the better Pluto shorts. 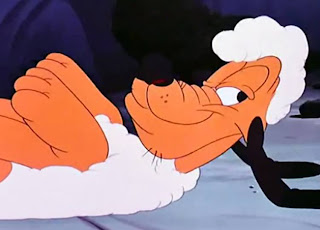 What we end up with is a short focused around the wolves that comes off very uneven.  Pluto’s involvement in chasing the wolves is nothing new, and feels that way.  I have to commend the animators who created the short, though, because they did a very good job of fluid movements and showing the characters through action without any dialogue.  In the end, though, it’s not enough to keep the short from falling flat.  Here’s hoping that the next few 1949 shorts will fare better.
Posted by Ryan at 2:41 PM