It's about time someone recognized this simple fact - Fathers are People.  Goofy's role as George Geef, the bumbling suburban everyman, now extends into fatherhood, with this 1951 short.  We get to see him go from the announcement of his child to all his friends all the way through the child's toddler/preschool years.  In seven minutes, that's a pretty good accomplishment.  It also manages to keep humanizing the Goof, keeping him far away from his Dippy Dawg roots. 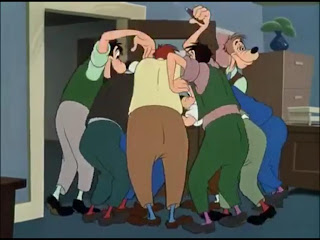 The short's opening bits where Goofy is assisting in the care of his new son is somewhat intriguing, but basically reinforces the stereotype that fathers don't really know how to take care of kids.  As a father of two myself, I'm pretty hacked off about that stereotype.  That's a separate issue, but here the trope is at least somewhat funny, as we see the repeated attempts by Goofy to try and help, but he is unable to get the right thing done.  That is a familiar situation to anyone with a kid, as they are generally mysteries. 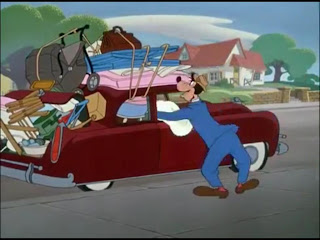 In fact, this short is full of requisite jokes.  In addition to Goofy's inability to change a diaper, we have the "load the car full of stuff but forget the baby" joke, the "parents acting more childish than the kids" joke and a few more.  All are executed well, but the fact that anyone who's watched any sort of comedy with kids has seen these jokes before makes them fall flat for a modern audience. 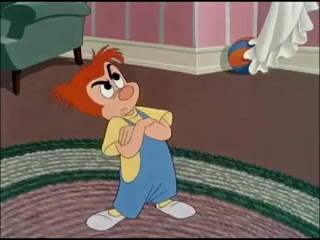 When Goofy's child grows up a bit, we get to see the best parts of the short, as Goofy and his son battle over toys in the living room.  This was the part I could relate to, and enjoyed the most.  The child manages to outsmart his father throughout the roundabout battles, simply by being a child.  If you've ever been through this dance with a child, you know it's so spot on that it's a little scary.  The kid manages to make the best moves, leaving George Geef out in the cold. 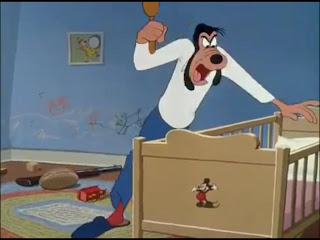 When George is just at the end of his rope and goes into whip the child with a hairbrush (and we see a nice Mickey Mouse picture on the crib), his son pops up, gives him a hug and a kiss then goes to bed.  It's exactly the parent/child dynamic that so many of us face, but put into Goofy's world.  He finally retires to his chair and says out loud that he'd love more kids, but is terrified when his wife shows him a baby sweater she's knitted.  The relief  Goofy feels when he finds out the sweater is for the dog, and not another child, is so familiar.  All parents love their kids, but sometimes...there's just too much.  In Fathers Are People, the animators who have grown up from their earlier days are demonstrating their deep understanding of that fact.