You know how I have been complaining that the 1950s Disney shorts are all cliches?  I have been looking for something new, and although Out Of Scale falls in the mold of previous shorts, there's enough there that makes it new and different.  It's a chance for the Donald vs. Chip and Dale dynamic to be used in a different way, and create something that becomes a classic in the history of Disney animation. 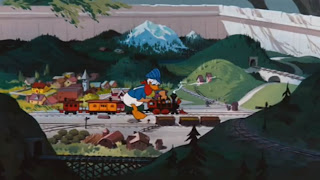 The set up should be familiar for fans who know about Walt Disney.  Donald has a model train set in his backyard, big enough for him to ride on, but small enough that it's not a full size train.  If you've ever read or watched a biography of Walt, you'll know that he had the exact same set up in his backyard.  The backdrops and vistas in Out of Scale remind me so much of pictures of Walt doing the same thing in his backyard.  It's a great nod to Disney history at a time when it was still going on. 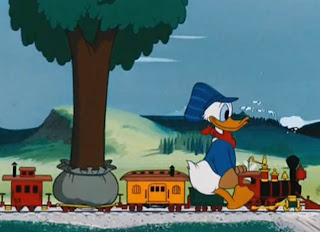 The conflict between Donald and the chipmunks begins when Donald decides that a regular sized tree is out of scale for his miniature railroad.  Of course, it happens to be the tree where Chip and Dale live.  You can see how this could cause a problem.  What I love about this short, however, is it only goes down the obvious path for a brief moment.  The obvious path is a fight between Donald and the chipmunks, but instead, we take a nice diversion into something far more interesting. 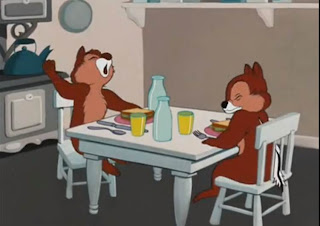 Rather than fight it out, Chip and Dale decide to jump into Donald's little town he has constructed and take up residence in one of the houses.  And Donald, rather than kick them out, measures the two and decides that they're the perfect scale.  It seems like a great solution for the problem.  But Donald just can't rest, instead deciding that having real "people" in his little town is a new way for him to play with his set up. 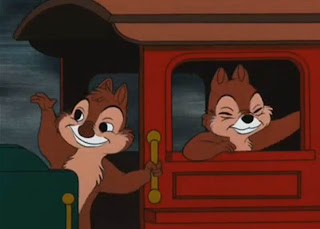 Rather than leave the chipmunks alone, Donald simulates rain, intense heat and all other sorts of conditions.  It's not a fight the way that most of these shorts go, but still leads to the conclusion of Chip and Dale outsmarting Donald, planting the tree back and labeling it a Giant Redwood to get around the scale problem. There's just so much to like here.  The characters are used in a new way, they interact in some funny ways and they get to a great result, not one full of animosity.  There's the nod to Walt Disney, a less mean Donald - it all adds up to make Out of Scale a classic.
Posted by Ryan at 4:31 PM