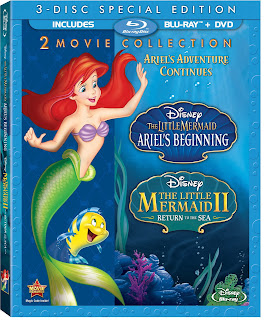 Fans who have not seen these movies may be excited to learn that for both of these movies Jodi Benson reprises her role as Ariel. In Ariel’s Beginning we are told a tale about how Ariel brought music back to the her home of Atlantica. And in Return to the Sea we follow an adventure where Ursula’s sister Morgana is seeking both revenge against Ariel and control of Atlantica. She does this by coaxing Ariel’s daughter Melody into becoming a mermaid. Talk about role reversal!

There’s no new content on the Blu-ray other than a new top level menu that allows you to pick which of the two movies you’d like to watch. Most will consider Morgana from Little Mermaid II to be a stronger villain than Marina Del Rey from Ariel’s Beginning, though neither is more well liked or appreciated than their predecessor Ursula.


Folks who have the original DVD versions of these movies will be missing some of the content found in this collection - the additional content had been added in subsequent releases - and may be looking to upgrade their collection. As these are two of the more popular sequel / prequel movies in the Disney collection, if you’ve not seen these now might be a good time to see them whether buying or just renting.