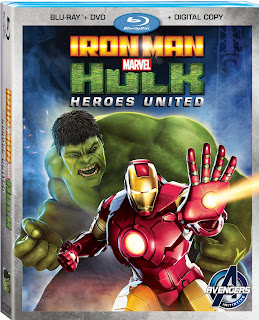 Today marks the release of Iron Man & Hulk: Heroes United slated to the be the first in a series of computer animated Team-Up movies released by Marvel. As the title implies this movie centers around an adventure where Iron Man and the Hulk are placed in a situation where they need to team up in order to defeat a powerful enemy. The dynamic between the two characters is well known to comic book fans, and strong attempts are made to reflect that in the movie.


To keep these characters on familiar grounds, Marvel brought in the voice talents of Adrian Pasdar and Fred Tatasciore who are already well known by animation fans as the voices of Iron Man and Hulk. Rounding that out are the ever prevalent voice talents of Dee Bradley Baker as the primary villain Zzzax and David Kay who animation fans will also already recognize as the voice of Iron Man’s artificially intelligent computer system Jarvis.

Overall the story is okay, but it seems to bring in a number of diverse elements that probably could have been left out to make the movie a bit more short and the story a lot more tight. For example, the beginning has Hulk battling the Abomination, and somewhere in the middle it has Hulk and Iron Man fighting off a horde of Wendigo. Throw into the mix that the whole reason the problem the heroes have to solve together exists is the terrorist organization HYRDA, and well, as I said, the story goes all over the place when it really didn’t have to.

That said, it’s not terrible, and fans of Hulk, more so than Iron Man, will probably like this movie. My biggest complaint though has to be the animation itself. It’s just too inconsistent. There are some things that look really good, like the electricity effects and Zzzax itself. But then looking at Iron Man and Hulk I just feel then end up looking like painted computerized lumps of clay. After looking at the awesome graphics found in a movie like Frozen, it’s hard not to see the graphical flaws.

Fans should take notice that after the end credits there is the usual Marvel added scene, this one setting up the Red Skull, who runs HYDRA, as the protagonist in an upcoming Iron Man and Captain America Team-Up sequel. The Blu-ray also contains a number of shorts from the DisneyXD “Marvel Mash-Up” series. They are included both as a Bonus Features and as part of the extended pause feature called “Marvel ‘Inter-Missions’”.

The movie is an okay diversion, and, like myself, fans of the current animated series like Marvel’s Avengers Assemble and Hulk and the Agents of S.M.A.S.H. will enjoy taking the time to watch this movie.