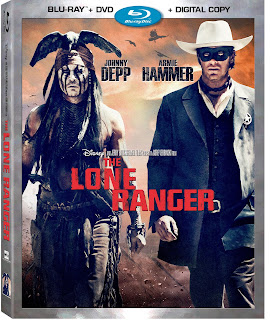 Icons are the sort of thing on which Disney is built. Whether they’re making them, transforming them, or building them. It is no surprise that Disney would pick up the reins of a legend like The Lone Ranger to create a classic Western tale in a time when such movies have all but escaped the consciousness of moving going audiences. If you missed this one in the theater, now’s your chance to see it as The Lone Ranger has been released on Blu-ray.

A lot of money was spent to make this movie and when you watch a feature line Armie’s Western Road Trip you can see just where some of it went. In this piece Armie Hammer narrates about his travels through the Southwestern United States while making The Lone Ranger. Seeing things like riding motorcycles through Monument Valley reminds me how fortunate I was to spend a summer touring the US when I was younger. Also depicted are the Canyon De Chelly, Creede Colorado, and Valles Caldera - all areas where parts of the movie were filmed.

In Becoming a Cowboy you can see how all the film’s actors spent a month training at a cowboy boot camp. There they learned to rope, ride a horse, and properly handle and shoot guns. The goal of this training was to achieve an authentic look and feel of men and women living in the Southwest in the 1800s. It allowed for them to become comfortable in their roles. It is well known that throughout the movie, Armie did many of his own stunts. And as a result of his training and practice, he became as good a rider as many stuntmen in the movie.

Do you like trains? Well, Riding the Rails of The Lone Ranger is something you’ll really like. It talks about how in the middle of the desert they movie crew built 5 miles of railroad track from scratch and by hand. This provided them the ability to control the rails for the movie rather than share live tracks with regular trains. While the famous “movie train” Sierra No. 3 was used for some shots they actually had to recreate real working trains that could be used, abused, and destroyed for the movie. You’ll also learn that in addition to trains on tracks they also built trains on the back of flatbed trucks that were driven on roads to film certain scenes with the tracks added digitally later. This allowed them to get an authentic feel they couldn’t get on a soundstage.

There’s also a deleted scene about a Locust Storm. It is part storyboard, and part rough computer graphics. There is music, but there is no other sound - only subtitles. In it, Tonto and The Lone Ranger look more like they do in the color episodes of the old TV series. It is about how the pair are saved from being strung up by the townsfolk by a swarm of locusts that attacks and destroys the town. In addition there is also a series of Bloopers available to watch from during the filming of the movie.


I can understand that you may be one of many who avoided this movie in the theaters. However that’s really no reason to avoid it in your home. It is in my opinion a very good movie and one that while you might not want to own, you should definitely rent. So take the reins and enjoy the ride. If you’d like to hear more about what I and my co-hosts thought of the movie you can listen to Episode 133 of our podcast.