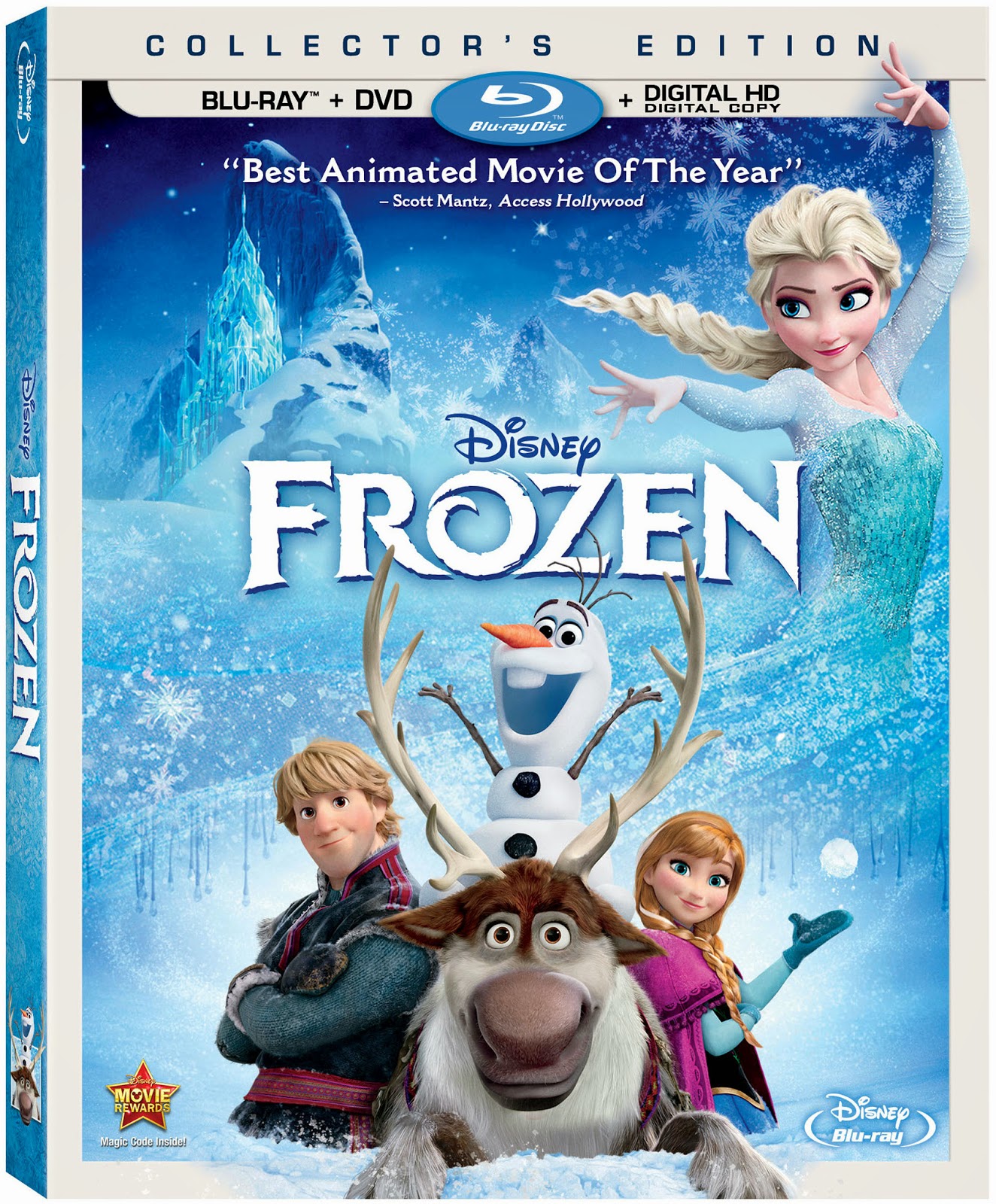 In what has definitely not been a chilling reception, the Academy Award winning Disney animated feature Frozen is doing gangbusters at the box office by still ranking in the top 10. This makes it a little hard to fathom looking at a Blu-ray release for a movie, but since the Frozen Blu-ray is going to be released 1 week from now on March 18th, it’s time to take a look. After all, don’t we all need warm hug from Olaf in our homes.

The menu is really nice, it has some music from a few of the songs playing in the background with snowflakes floating around. Some of the snowflakes move to the front of the screen becoming larger and transforming into viewports of characters from the movie. It is also super easy to read due to its graphical design. If you surf around, you’ll discover that the Blu-ray has English, French, and Spanish languages and subtitles.

“Get A Horse!” is the short that was shown before Frozen in theaters it is a combination of old and new animation styles, allowing the two forms to interact in unique ways. It also draws from the past by pulling in sound samples from older Disney Animated Shorts. This short had a great reception from old school Disney fans who are really into the older Disney Shorts that this pays homage to. It’s also a neat way to get modern animation fans to maybe consider taking a closer look at the older works. Don’t forget to look for Oswald.

In The Making Of Frozen Josh Gad (Olaf), Jonathan Groff (Kristoff), and Kristen Bell (Anna) take us on a lyrical journey through the making of the film. It has various animators and productions staff at Walt Disney Animation Studios singing and dancing including a brief appearance by John Lasseter. It’s a really cute way to present the question being asked to producers of, “How did we make Frozen?” Just don’t hold your breath for the answer.

D’frosted: Disney’s Journey From Hans Christian Andersen to Frozen talks about how many of Disney’s greatest stories have their roots in fairy tales and how it was more than 70 years since Walt first secured the rights to the Snow Queen before Frozen was made. Alice Davis, costume designer for It’s A Small World, talks about some design pieces by her husband Marc Davis for a show to occur at Disneyland called The Enchanted Snow Palace - a cold ride designed for summer days. Throughout Directors Chris Buck and Jennifer Lee look over the work, talk about them, and discuss how some similar ideas came through to Frozen.

The Deleted Scenes can be watched with Introductions by Directors Chris Buck and Jennifer Lee:

There are Music Videos of the Academy Award winning song “Let It Go” in several different languages:

Also found is the Original Teaser Trailer which for most people was their introduction to the movie. For me, I found this trailer unlikeable, and it wasn’t until the movie itself that I came to like both Sven and Olaf.

This is a solid Blu-ray release, and the effort put into it shows. Some features I would have liked to have seen added are one involving some background into the research put into the movie, another involving the animators and some of the new technologies developed like Matterhorn, and a third involving the voice studio work. There is no doubt that this release is going to be a big seller, the movie is great, and folks just want to own it.