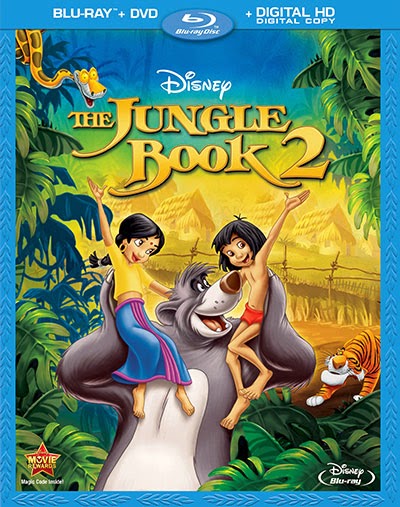 Now available on Blu-ray is the Jungle Book 2. Created by Disney Toon Studios it is a sequel to the classic Disney animated film The Jungle Book, which recently had it’s Diamond Edition release back in February. This story is about Mowgli’s return to the jungle after having spent some time living with man in the village we see him wander into at the end of The Jungle Book. For those who are not familiar with and do not own the original The Jungle Book, the Jungle Book 2 Blu-ray contains a feature called Synopsis Of The Original Movie - The Jungle Book is a condensed version of the story told in less than 5 minutes using clips from the original movie.

The overall look of the menu as a stylized shadow puppet show patterned after the movie’s opening is really inventive, but unfortunately the lack of a distinctive contrast between the current menu choice and other menu items makes it very difficult to use. It’s a shame that menus are still being released like this. In addition to the standard subtitles that available on the Blu-ray, there is a Sing Along With The Movie is a feature which turns on subtitles only for the songs in the movie. And you can watch two songs from the movie, “W-I-L-D” and “Jungle Rhythm”, in their music video format from The Disney Channel.

The Legacy Of The Jungle Book is a background piece about the making of The Jungle Book 2. Roy E. Disney opens talking about the lasting memory that The Jungle Book carries as the last film Walt worked on. The production crew of The Jungle Book 2 discuss how they put the movie together using elements of The Jungle Book itself, and then building off of them. They worked to increase the depth of field of the animated scenery, and added 3D elements to some scenes. As the movies were made 30 years apart the crew took care to cast voice actors that sounded as close as possible to the original. They lucked out in the case of Jim Cummings as the voice of Kaa - originally done by Sterling Holloway. Cummings had already replaced Holloway as the voice of Winnie the Pooh. Similarly while a few songs come from the original movie there are new songs that work to build off the originals, but with a modern flair.

The last feature of the Blu-ray are two Deleted Scenes that are introduced by Sharon Morrill & Matt Walker who were the President & Senior Vice President of Disney Toon Studios. “I Got You Beat”, presented via storyboards, is a song sung by Mowgli and Shanti that was intended to foster a rivalry that existed between the two characters during early production that was eventually written out of the plot. “Braver”, also shown via storyboard, is a song sung by Shanti that explores her fears of being alone in the jungle.

While I’m normally not a fan of the “Number 2” sequels to Disney animated films, but this movie itself is actually okay, which is most likely why it was released into theaters originally instead of direct-to-video. As you can see there aren’t a lot of features on the Blu-ray, but these are probably the only extras that already existed for this film. This release is not a must have, but it is a good companion to the new Diamond Edition of The Jungle Book.