Make Mine Music - An Overview

We’ve come to the next feature film in our list, Make Mine Music, which is the third in the famous (some say infamous) package features. During World War II and shortly thereafter, Disney’s artists were taxed trying to keep the studio together and produce films at the same time. The solution was to package together shorts or extended short films into a feature length piece of animation. 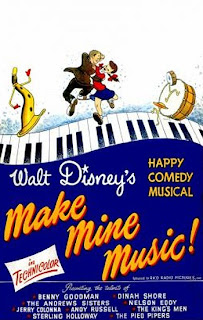 Make Mine Music is a modern day version of Fantasia, featuring popular music of the time interpreted by the animators as opposed to the classical pieces we saw in Fantasia. There are some exceptions to that, such as the Peter and the Wolf section, but for the most part we get modern music of the 1940s like Benny Goodman, Dinah Shore and others.

The disjointed nature of this film should not be surprising, then, but it still comes off much worse than Saludos Amigos or The Three Caballeros did. In those films, the framing device was a story, such as Donald’s birthday or the tour of South America. In Make Mine Music, the shorts are presented merely as one program after the other in a theatre, with curtains raising to present title cards for each short. It does not even attempt to tie the pieces together. 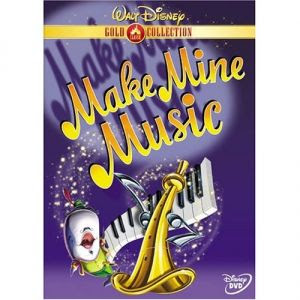 Combine that with the fact that Make Mine Music features over 10 distinct shorts, as opposed to the 5 or 6 that were in the previous package features. Where pieces in the South American films flowed together to create an almost lyrical flow through the film, this film feels like a group of completely unrelated pieces. The number of different styles, settings and musical pieces makes the film difficult to follow.

This is not to say that there is not some great work within the film. The aforementioned Peter and the Wolf stands out, as does The Whale Who Wanted To Sing At the Met. Some of the items just don’t hit, however. The more abstract shorts tend to fail not because they are abstract, but because they are less abstract than they could be. In Fantasia, we saw colors and lines giving form to musical notes, whereas in this film they are represented by musical instruments.

It’s hard to judge Make Mine Music as a whole, because it was not constructed as such. It’s really just several shorts that were cobbled together to crack the feature marketplace. Instead of trying to make some cohesive statement about the film, I’ll review each piece throughout the rest of the week. Tomorrow I’ll touch on the first part of the film, including the Martins and the Coys, a short that has been edited out of the DVD release.