I left off yesterday on the note of Casey at the Bat, the fun piece of Make Mine Music that has been pulled apart and shown separately multiple times. The next piece of this film is again a tonal shift, moving from the literal style to the impressionistic style with Two Silhouettes. Once again, it doesn’t entirely work. Two Silhouettes could not be a better title for this segment. The short features two dancers, filmed in live action, then reversed out into silhouettes. They are doing ballet, and the figures are manipulated around the screen across an animated background. Honestly, it just doesn’t work. The music is good, the animation is fine, but the live action figures don’t play well in that world. Especially when you turn them into silhouettes, with not features to act from, the figures look stiff and unwieldy.

Once again, though, the film switches back to a more literal style, but this time playing off a piece of classical music in Peter and the Wolf. To say this is the best piece in the movie is an understatement. The brilliance of the short is the way it takes the inherent story of the music and brings it to life, not only through Sterling Holloway’s narration, but the acting of the characters. 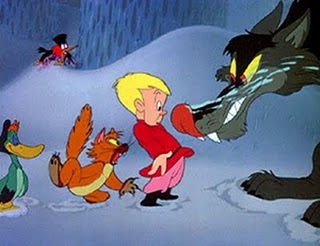 Peter and his animal cohorts are visualized here in a way that makes them relatable and exciting. I was instantly hooked on this short by the bravery that Peter displays in going after the wolf, through his puffed out chest and bravado. The acting that these characters do, from Sasha the bird to Sonia the duck, is fantastic. It’s a tour de force of how to marry animation, music and narration to create a compelling story.

After You’ve Gone, the next segment in the piece, tries to marry the two conflicting styles we have seen so far in the film. Set to a Benny Goodman number, this short features instruments taking on human qualities to dance around the screen to the music. It’s a different piece than the other impressionistic segments, though, because the animation style is much more direct. It manages to soften the transition between the two styles rather well. There is still no narrative flow to the piece, but that does not matter quite as much, because the music is better and the figures are easy to follow and enjoy. 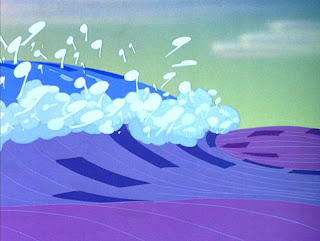 The final two pieces of the film are more direct storytelling, although the first, Johnny Fedora and Alice Bluebonnet, is told entirely through the song of the same name. Telling the story of two hats that fall in love would be a difficult proposition if it weren’t for the skills of the animators involved. We get to see emotion on the “faces” of the hats very well and consequently develop an attachment for them. 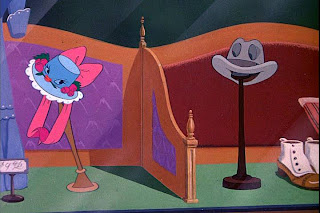 The Whale Who Wanted To Sing At the Met, meanwhile, falls squarely in the tradition of other Disney shorts, and reminds me a great deal of Baby Weems, from The Reluctant Dragon. Not from an artistic perspective, mind you, as the style on this short is the typical short subject work, but from the way the story is told. The storytelling device is a flashback/news style that creates a momentum to the story. 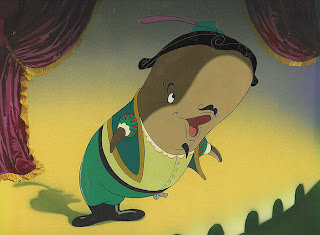 While the ending is tragic, this short still manages to be uplifting and tell the story with a moral of letting people (or animals) do their own thing. It’s a fitting end to Make Mine Music, a jumbled mess of a film that allowed each different segment’s director to chart their own path. That’s not something you would have seen from Disney in the Snow White and Pinocchio days, but I can only assume the experience will be of use to the team in later films. For now, Make Mine Music doesn’t work. It has great individual parts, but the sum is not compelling.