Yesterday, I talked about the disjointed nature of Make Mine Music, and how the different shorts did not hang together well as a feature film. Each of these shorts, though, have some unique features, and they are worth discussing individually, beginning with the one that originally opened the film, The Martins and the Coys.

This short was removed because of the gunplay and violence throughout, and that’s a shame. Featuring the King’s Men singing a narration of the story, it’s basically a retelling of the Hatfields and McCoys feud. The animation in this short is quite good, with fluid movements of the characters and appealing designs. It plays much like one of the better Silly Symphonies. 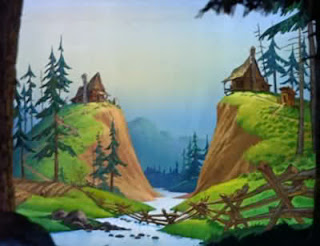 While it takes a while for any story to come through, once it does it’s fantastic. We see one member of each feuding family come together to marry, but then end up still feuding. The dancing, fun and overall silliness of this piece is a great addition to the film, and its absence is truly felt if you watch Make Mine Music without it.

The next segment, Blue Bayou, however, is not such a piece. While The Martins and the Coys plays like a great short cartoon, Blue Bayou attempts to be something more. It is obviously an effort to be an interpretation of music like Fantasia. Unlike Fantasia, though, the short feels incomplete, and doesn’t provide characters to watch, just pastoral imagery.

This could be intentional, as one source I read claimed that Blue Bayou was intended to be part of Fantasia. Seen back to back with other segments of Make Mine Music, however, the tone seems off. It’s not the fault of the animation, which is gorgeous. This is feature quality stuff, which is rare at this point in the Disney feature films. There’s just not enough in the story to make it work.

What makes it even more jarring is going from Blue Bayou to All the Cats Join In, which is much more similar in tone to The Martins and the Coys. This is a fun and exciting segment, because the animation is so fluid and stylish. To the tune of a Benny Goodman song, it’s a moment in time captured perfectly. We get the bobby socks, the malt shop and the cruising culture all portrayed with fun and fast moving animation. 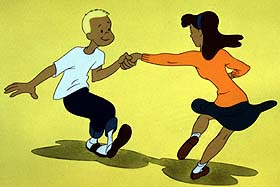 Once again, though, the next segment, Without You, makes a jarring transition from the quick pace and sends us back into the impressionistic style of Fantasia. If viewed on its own as a piece of art, this would be a perfectly acceptable short subject. Andy Russell croons the title song while we get a series of images accompanying him, moving from brush strokes and moving lines into more defined images like trees or rivers. 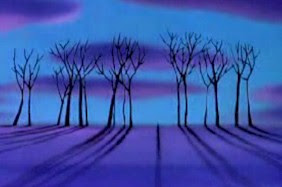 If you paired Blue Bayou and Without You together and made a movie with that style, it would not be a commercial success, but could arguably be an artistic one. What you have in The Martins and the Coys and All the Cats Join In is a less artistic statement but still a stretch of the medium. I happen to prefer the latter approach, and that is what happens during Casey at the Bat.

Jerry Colonna steps in to voice the short, reading the classic poem of Casey at the Bat while the story is told through animation. The style is again less impressionism and more short subject, but it works beautifully. The arrogance of Casey, the nervousness of the pitcher, the fluttering hearts of the women – all of them come across quickly and easily. It takes great skill to do that in animation, and this is a case where you can see the talent that Disney had on staff at the time. 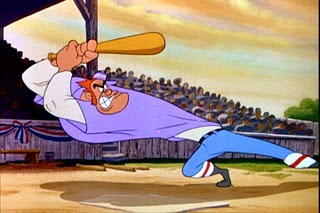 The jumps back and forth between the two styles contributes greatly to the uneven nature of Make Mine Music. The first half of the film embodies this. But what of the second half? Ah…stay tuned, dear reader.