Donald Applecore represents the way that Donald’s shorts have devolved in this period of Disney history.  For this era, it’s all about Donald fighting Chip and Dale over some food item.  There’s been nuts, pancakes, pies and now apples.  The problem is that there is not much different between each of them.   Donald is either doing a business or growing things, the chipmunks come and interrupt that, then they fight, and the chipmunks usually get the upper hand. 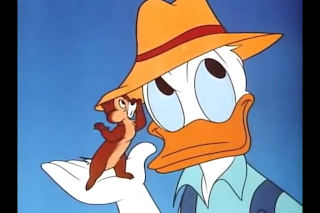 For Donald Applecore, the short focuses on Donald running an apple grove, where he stores his “delicious apples” as the painting on his barn says.  There is a possible place where things could diverge right at the beginning of the short, but it doesn’t.  When Donald catches Dale eating his apples, Dale offers to take Donald into his tree and show him their stash.  There’s a chance there for things to go a different way.  Sadly, it’s the same thing over again. 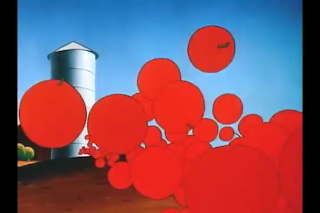 The chipmunks don’t share, they taunt Donald, throw him out of their tree and end up stealing more apples.  There are a few brief moments of back and forth before Donald calls in the big guns.  Random things like apples rolling down tree branches and Donald sticking his head into trees fill space until things get weird with Donald in a plane.  Yes, Donald in a crop duster style plane.  It’s so crazy that it almost salvages the short. 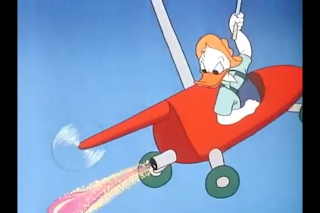 The last few minutes of this short involve this plane flying over the crops and spraying all sorts of harmful gases or other concoctions at the chipmunks.  The craziness ensues when Donald starts throwing everything he has into the plane, including something labeled “Atomic Pills.”  It’s nuts! As Donald flies around the farm, he is firing pellets of this atomic mixture out of the rear end of the plane and destroying everything in its path. 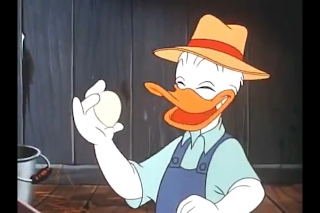 This random destruction ends when Donald shoots a pellet into his chicken coop (and why he has a chicken coop on an apple farm I don’t know) and a chicken eats it.  The resulting egg explodes and literally blows a hole through the world to China, where Donald ends up.  It just becomes so bizarre that it’s hard to enjoy.  In the end, though, it becomes the same exact thing that all Chip and Dale shorts are, which is them enjoying a victory over Donald and enjoying the fruits of their labor.