Goofy’s evolution into the suburban dad George Geef has been a strange transition to say the least.  After all, this is a character who flew to fame on the back of being a bumbling fool, making all kinds of mistakes on various sports or other tasks.  To make him then a part of a suburban community seems a bit awkward.  In Hello Aloha, the Disney team managed to make it fit better by having George Geef experience something universal – the desire to escape the daily grind for a tropical paradise. 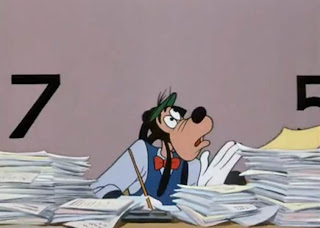 The transition from the work a day world to the tropical paradise where Goofy spends the majority of the short is probably the most awkward bit of it.  After being berated by his boss and basically embarrassed, Goofy drifts off into a dream and walks across a cloudscape into a tropical land.  I’m not going to suggest that the Disney team were imbibing while at work, but I will say it wouldn’t surprise me.  It accomplishes the goal, though, which is to get Goofy into the tropical land where the rest of the short takes place. 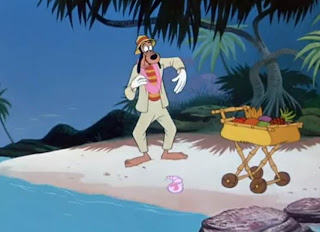 The island has to be Hawaii, but it really doesn’t matter.  It’s there to represent the dream that all work a day drones have from time to time, of escaping the real world and moving on to live a life that is stress free in some warmer climate.  Everything flows from that premise, and it makes the short carry this dreamlike quality.  It feels like something that is happening but yet not real all at the same time.  Especially because every native on the island is also a clone of Goofy. 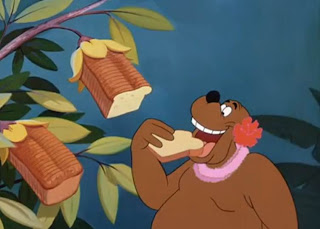 This short takes on the qualities of the “How To” shorts, with the narrator reading the story of the island to the audience while Goofy messes things up.  It is poking fun at the idea that this island escape is actually worthwhile.  My favorite scene is the Goof lying in a hammock, swinging from side to side.  As he hits the left side of the screen, he’s taking time to paint, then as he swings to the other side, types a novel on a typewriter.  It’s a great mockery of the myth that if only we had the time away from the work  a day world, we’d all be great artists. 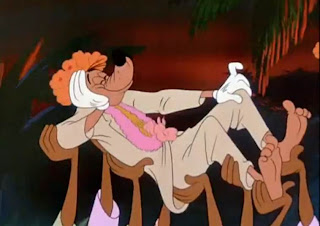 The final nail in the coffin, almost literally, is when the natives pick up the newcomer Goofy and toss him into a volcano.  It’s a very nice takedown of that tropical myth that things will be so much better if we got away.  While there may be some truth to that, in the end, the grass isn’t always greener.  That’s the main thing I liked about Hello Aloha, is that it had a subversive quality to it.  It was funny, but still something that would cause comfortable suburbanites to think a bit.  That is exceedingly rare in this era of Disney animation.