From time to time, Disney did experiment with different things in the late 1940s and early 1950s.  Part of it was just having the time to do things, as Walt turned his eye more towards Disneyland, and part of it was the ability to look back at other things they had done and mirror that.  Lambert, the Sheepish Lion, is pretty much something straight from the package features like Melody Time and Make Mine Music.  It’s a simple fable based around a simple song, and honestly becomes one of the most memorable Disney shorts of this time period. 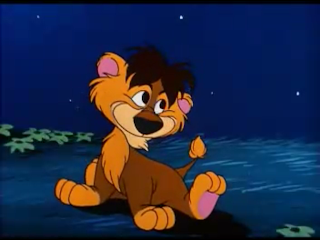 It’s so much like the package features partially because it features the amazing narration and voice work of Sterling Holloway, best known as the original voice of Winnie the Pooh.  Holloway pulls double duty here as both the narrator and reprises the role of the stork that he played so memorably in Dumbo.  In this case, the stork again makes a delivery, this time accidentally dropping a lion in amongst a flock of sheep.  Unfortunately for him, one of the ewes takes a shine to the little lion and refuses to let him correct the mistake. 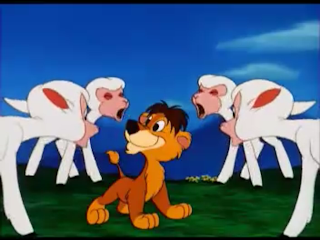 The title, then, is a very clever play on words, as Lambert, the little lion, is not only sheepish in that he’s raised by sheep, but as we see, he is a bit of a coward.  That’s the basis of the titular song, as the sheep around Lambert taunt the little lion, knocking him over, and forcing him to run away.  Lambert is unaware of the power he holds as a lion, and doesn’t have a thought of fighting back to the rather mean sheep.  But the song?  It’s an earworm.  I watched the short and have been singing it silently ever since.  It would have fit right in with the package features. 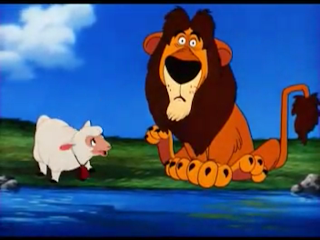 The flip of the switch occurs when Lambert grows up, and goes from a little lion cub to a full fledged lion.  He’s still a coward, but now everyone’s a little more forgiving, since they know he could turn around and eat them.   It’s not until a wolf menaces his mother that Lambert becomes a vicious killing machine.  He roars, he chases the wolf off, and he becomes a hero.  It’s a cute little turn, watching this adorable lion become a protector of his sheep clan. 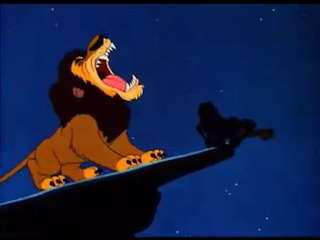 It proves that if done well, Disney was able to introduce new characters.  Lambert is one they didn’t revisit since, but you can find him around.  In the new Storybook Circus at Walt Disney World, for example, there’s a poster of Lambert.  And you’ll find references to him in other places around the Disney parks and resorts.  It all started here, though, with a short that had a lot of heart, good story, and good music.  That combination was something that the serial shorts like Donald and Goofy were missing at this time.
Posted by Ryan at 10:55 AM

Email ThisBlogThis!Share to TwitterShare to FacebookShare to Pinterest
Labels: Lambert the Sheepish Lion, Movies and Shorts