Sometimes it’s hard to watch the older Disney shorts, because they look dated.  Not from an animation standpoint, but just the things that are accepted as commonplace within the animated world.  If you have any of the Walt Disney Treasures tins, you’re probably used to Leonard Maltin coming out before certain shorts and warning about offensive content.  Whether it’s blackface or stereotyping Native Americans or the Chinese, certain things were just acceptable in the 1940s or 1950s and are not so today.  In the case of No Smoking, it’s more that no one today can imagine a world where smoking was so much a part of every day life. 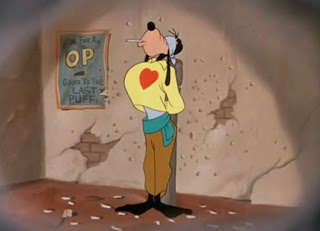 No Smoking sees Goofy return to the character of George Geef, which seems to be his place in the Disney universe at this point.  Every character in the short is a version of Goofy, but it’s Geef that is the main character.  First, though, we have to establish the history of smoking and how it came to be, in a very loose interpretation of the history of America.  We see Indians greeting Columbus with a cigar, aristocratic knights smoking cigars and the Old West offering a condemned Goof his last cigarette before the firing squad opens fire. 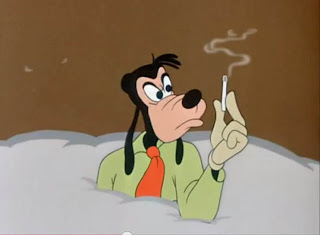 It all ends up offering a picture that tobacco is central to American life.  And if you watch Mad Men or the rest of this short, you can believe it.  Having not been around in the 1950s I can’t speak to it, but in this short, the culture is one of everyone smoking, all around the office, the street corners and even in bathrooms.  There are some memories I have of this being close to true, where aunts and uncles of mine would smoke wherever they were, but as I said, today, it’s pretty inconceivable. 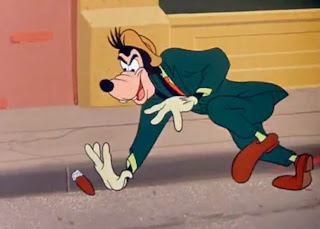 I thinks that’s part of what put me off about this short, is that I’m not a smoker and I find it a little sickening.  Now, I have no problem with people who smoke, and I say to each their own, but the smell actually makes me sick, so I don’t enjoy it.  Between that and the fact that the second half of the short is just not that compelling, it makes for a dull ride.  We see Geef swear off smoking for all of about 30 seconds, then go manic trying to get his next smoke. 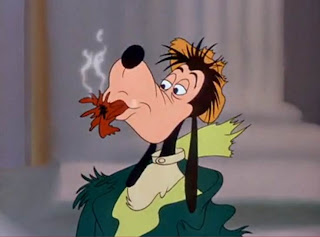 That’s not compelling to me, because we’ve seen it before.  When Goofy went on a diet, he was haunted by food.  All the “How To” shorts featured versions of this as well.  It’s just not a new idea, and although it plays off a common issue and addiction, it’s nothing new.  At this point in his career, Goofy doesn’t offer the same kind of entertainment he did in earlier days.  That’s sad, because he is my favorite of the Fab Five, but it’s just a function of a different environment and different stage of life for the animators.
Posted by Ryan at 7:00 AM