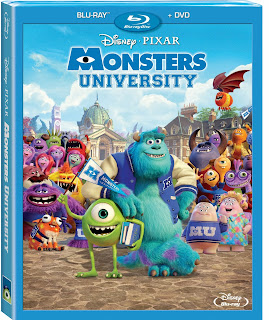 The Pixar movie of the year was Monsters University, a look at the origins of the characters of Mike Wazowski and James P. Sullivan and how they got to be the friendly, loveable monsters we first met in Monsters, Inc.  If you’ve listened to our podcast, then you probably know that this is the sort of movie and story that is right in my wheelhouse.  This story about how they met in college, first became rivals, then partners, and finally the great friends we know and love is an almost timeless treasure.  Released today, October 29, 2013, I got to take a sneak peek at the Collector’s Edition which includes a Blu-ray, DVD, and Digital Copy.


This release is chock full of so many bonus features that they couldn’t all fit on the main movie Blu-ray, and they had to include a 2nd bonus features disc.  On the main disc you’ll find the cute and sweet tale of how umbrellas can find true love even in a rain slicked city, The Blue Umbrella.  As well as Audio Commentary by Director Dan Scanlon, Producer Kori Rae, and Story Supervisor Kelsey Mann.

Being the technical wizard that I am, one of my favorite features on the bonus disc are the Set Flyovers.  These are seamless, animated camera explorations through the sets of the movie.  They contain no monsters, just the sets themselves.  It really gives you a great in depth look at each of the locations: The Campus, The Scare School, Frat Row, and finally The OK House where you can even make out a Mickey Mouse ear hat tacked up on the wall (I hadn’t noticed this when I originally saw the movie).  There’s also Furry Monsters: A Technical Retrospective a discussion about the calculations and physics behind animating fur/hair.  How much things had advanced from 5 furry monsters in Monsters, Inc. to 250+ in Monsters University

In what I imagine will be a much talked about set of clips, the Deleted Scenes are introduced to us by Dan Scanlon, where he explains to us that movies are an evolutionary process.  He first discusses with us the scene called Rivalry that was designed to pay homage to the “You've been jealous of my good looks since the fourth grade. ... looks since the fourth grade” line from Monsters, Inc. and why it was removed from the movie.  Next is Recon where we learn how monsters make their information files on children through “Bedroom Recon”.  In Movie Night  and Drama Class we see elements that are brought us instead as part of the final scenes of the movie.

There are many more features that you’ll find in this Blu-ray set, including an Art Gallery with many pictures and sketches and other artwork from and for Monsters University.  If you get the Collector’s Edition you’ll also get DVD and Digital copies of the movie, and many will be happy to know that Disney has branched out beyond just Digital copies from Apple’s iTunes Store.  Monsters fans will enjoy this Blu-ray release, as it will offer then several hours of solid entertainment from which they could learn some truly interesting tidbits about Monsters University.