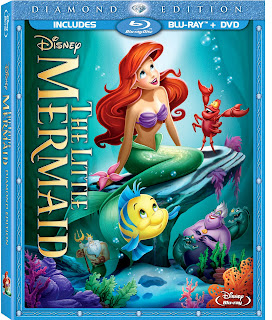 It’s been quite some time since the Disney Film Project Podcast took a look at The Little Mermaid back in Episode 7.  Ariel’s adventure as she finds her way through her dream of living on land and finding true love is probably one of the most well known animated films of all time.  The scope of the impact the film has had on so many is one of those thing you hear about constantly.  As a result, The Little Mermaid Diamond Edition is probably one of the most highly anticipated and welcomed Blu-ray releases from Disney.

The first feature on the Blu-ray that caught my eye is titled @DisneyAnimation - which some might recognize as the Twitter handle for the Walt Disney Animation Studios.  John Musker and Ron Clements, the writers and directors of The Little Mermaid, discuss what it’s like to work for the studio.  There are also a number of other Animators at Disney who discuss how The Little Mermaid drove their careers and continues to inspire them today.  We get to see them working on the upcoming Disney film Frozen as well as the short Paperman.  There are some interesting Tilt Shift videos of the studios along the way.

There’s a piece titled Under the Scene: The art of Live-Action Reference where Clements, Musker, and others discuss how they returned to the roots of Disney animation to create The Little Mermaid.  They used live action to create scenes intended for the movie that were filmed and reviewed in order to study and recreate the movements in the animated movies.  The idea is to help make the characters believable, a practice that goes all the way back to Snow White.  You get to see Sherri Stoner and Joshua Finkel, the live action models for Ariel and Eric, performing these scenes and how they are recreated in the movie.

Howard’s Lecture is a narration by Musker and Clements about the late Howard Ashman.  They talk around bits and pieces from a lecture he gave to other animators where he discussed his beliefs about how to make a great musical by truly integrating the music into the musical itself.  This piece is very interesting and well done though a bit sad when you are reminded of the great talent that was lost with his death.

There’s also a new Disney Intermission titled Crab-e-oke Sing-a-long.  As you might have guessed this is a series of karaoke songs hosted by everyone’s favorite crab Sebastian.  The only real problem with this feature is that the narration voice for Sebastian is terrible.  The songs themselves are directly from the soundtracks - however the animation behind them is a combination of some new animation with re-worked animation clips from the movie.  The songs covered are:

Also on the Blu-ray you’ll find:

The Diamond Edition set continues to be top of the class when it comes to Blu-ray releases.  They always seem to contain just the right amount of additional features to go along with each feature.  And The Little Mermaid Diamond Edition is a perfect example of that.  I have no doubt that this will be a very popular item as we head into the holiday season.  Not to mention the High Definition remastering of the film is well done and helps really enhance viewing.
Posted by Unknown at 9:00 AM