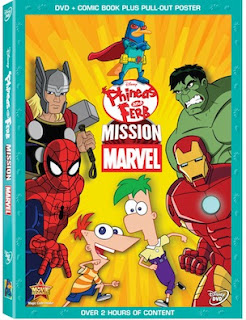 There’s no question that I am a world class comic book and superhero fan.  I read at least 1 comic book most days (if not more). Along with that I’m a huge fan of animation in general; as I write this I’m watching the latest episodes of the Ultimate Spider-Man and Avengers Assemble animated series.  However, when it comes to animation it’s not only superheroes that I like, which is why the series Phineas and Ferb has not escaped my attention.  In fact, previously I’ve reviewed Phineas and Ferb: Animal Agents DVD Review.

So imagine my delight when I first found out there was going to be a Phineas and Ferb episode co-starring some of Marvel’s most popular superheroes.  For me it like that first time you discover the awesomeness of chocolate and peanut butter combined.  The whole idea spoke volumes to me.  There is a quirkiness in the relationships between the superheroes they picked: Hulk, Thor, Iron Man, Spider-Man.  One that would fit in well with the universe of Phineas and Ferb.

At a price point around $15 the DVD will save a few dollars when you consider that each of the 9 episodes would cost $2 digitally.  There is no additional bonus content on the DVD itself, but along with it comes a bonus comic which also contains an interview with Dan Povenmire and Jeff “Swampy” Marsh - the creators of Phineas and Ferb. Inside the comic you will also find a poster of Super Perry just in case you were wondering, “Where’s Perry?”
Posted by Unknown at 9:00 AM