Donald Duck and the Gorilla

Next to Goofy, Donald is my favorite of the big Disney characters. I think his shorts have been consistently funny and imaginative, mainly because of the work of Carl Barks and the story team creating an expansion of Donald’s world. It’s great to see that universe expand with characters and settings. 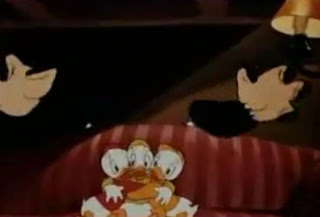 However, when I come across a short like Donald Duck and the Gorilla, I see something disappointing. After all the hard work in the previous shorts, this one just seems odd, because it’s a rehash of a plot point from an old Mickey short, and falls back onto gags that aren’t particularly new. 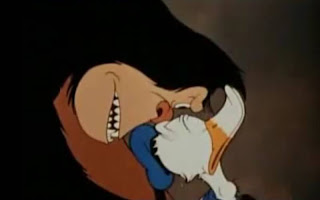 The setup for the short is that a gorilla has escaped from the zoo, which Donald and his nephews hear over the radio. Donald just so happens to have a gorilla suit laying around, so he picks up the gloves and uses them to scare the boys. They, in turn, put on the whole suit to scare him. This all takes place in the first couple of minutes of the short. 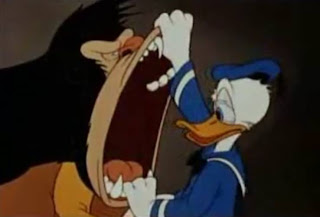 As you might imagine, from there the real gorilla shows up, and hilarity ensues. Sadly, it does not ensue properly, at least to my mind. There’s the obligatory gag where Donald mistakes the real gorilla for the boys in the suit, and from there it’s a bit of a mess. 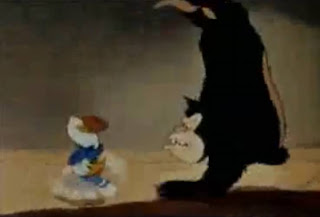 There’s a whole sequence where the gorilla doesn’t show up, but the boys are sneaking around with Donald while carrying a candle. The candle ends up dripping wax on Donald’s tail, overheating a doorknob and generally is a nuisance. Is it funny? Mildly, but the whole time I was wondering where the gorilla was. 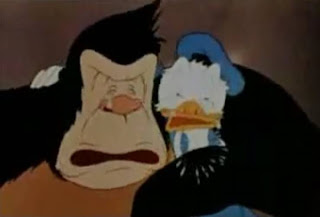 After that, the boys basically disappear, and the short is about the gorilla chasing Donald. It’s not that it’s a bad thing, but it is not necessarily good, either. Donald is funny, but we don’t get to see much of that here. We really get to see an old Mickey short revamped, and you could have dropped any character in this short and made it work. That’s why I can’t recommend this one.