How To Play Golf

I don’t play golf, so I want to state that right away. I’ve tried to learn, but frankly between trips to Disney and children, there’s just never time. However, if I were to try and learn, I would not take tips from Goofy, because How To Play Golf does just like all the other “How To” shorts, and shows the exact opposite of what one should do. 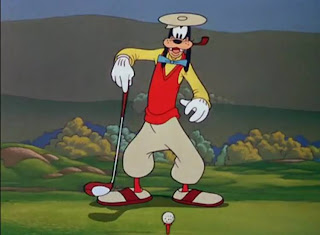 This one is not like some of our other recent shorts, where we have been shown the history of the subject leading up to the present day. Here, the approach is much more like the early efforts in this series, where the Goof is thrown right in and we see the narrator outlining the proper way to do things while Goofy ignores him. 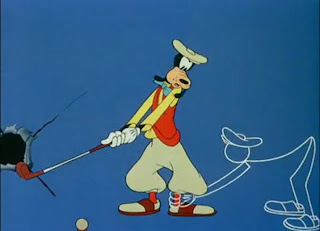 There’s an added twist this time, as after a brief intro, we transition into a blue background where we get a stick figure drawn to demonstrate the proper form for a golf swing. The stick figure is compared to Goofy, with obvious differences. The fun comes when the stick figure golfer climbs out of the “demonstration world” and enters the real world to assist Goofy. 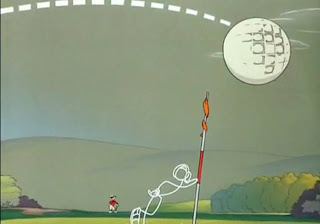 It’s a fabulous little trick, because now, in addition to the narrator’s dissonance to Goofy’s actions, we get to see the “proper” golfer’s dismay at the Goof’s attempts. Goofy obviously can’t play golf, so watching him swing away at the ball and miss or tie himself into knots is funny enough. Add on top of that the obvious disappointment of the stick figure and you have some comedy gold. 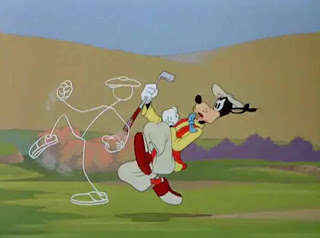 The big joke in the latter half of the short, though, is the constant refrain of the narrator to “play the ball where it lies.” You can imagine where that leads. All sorts of different locations for the ball leads to some uncomfortable positions for Goofy. There’s the obvious sand trap, but there’s also a turnstile and the top of a bull where the ball lands. 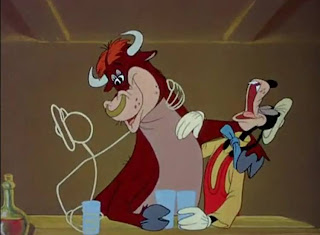 The last one is the best, as the minute Goofy hits the ball, the bull gets riled up and starts chasing both the stick figure and Goofy. It’s a frantic sequence where the ball keeps landing out in front of Goofy, who keeps hitting it to stay in front of the bull, with the stick figure hot on his heels. Eventually, though, they all end up in the clubhouse bar together, like any good golfers. It’s that touch of fun and frantic energy that makes this short so light hearted and fun.