At the heart of Trombone Trouble is a very interesting premise – what happens when Donald gets the ability to push back on someone making his life difficult? After all, we have all seen Donald get pushed around and had his frustration level rise. What would happen if he were able to get his way for once? 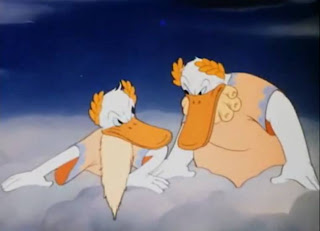 Sadly, though, in order to get to that premise, the filmmakers decided to take a round about route. Pete, the ever present villain who has moved on to torment Donald in the war years, is playing a trombone in his home very loudly. Up in the clouds, we see the Greek gods Jupiter and Vulcan unable to sleep because of the noise. 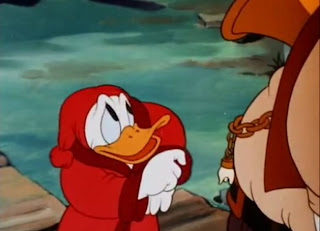 This raises some valid questions – why are Greek gods located over the United States? How loud can Pete play? If it’s so loud that it can be heard in the heavens, why does the sheer force of the sound waves not destroy everything in its path? 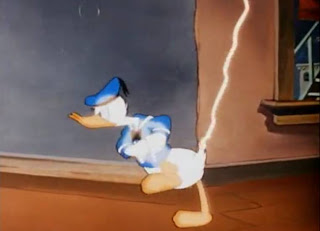 These are all just minor concerns, but they took me out of the story, which is not something you want in a short seven minute film. The Greek gods do serve a purpose, though, as they are looking for a way to silence Pete and his trombone. They find a willing accomplice in Donald Duck, who is next door trying to sleep. 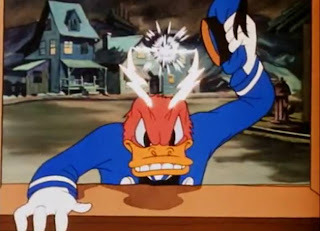 Jupiter powers up Donald with a fraction of his power, to allow Donald to take care of Pete. If there had been perhaps another method of getting to that point, it could have been much more interesting. I did find the scenes of Donald getting his payback on Pete very amusing. He attacks with strength, electricity and just plain meanness that is amusing and impressive. 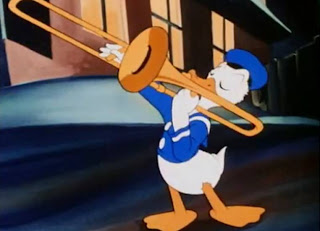 In the end he does chase Pete away, much to the delight of the Greek gods. Unfortunately for them, Donald decides to pick up the trombone and make some more noise, so it doesn’t end well. The bad part of this is that there is no real fun to be had in the animation or the story. There certainly could have been, but the set up is so difficult and complex that it doesn’t leave time for that. It’s fun, but could have been so much better.