Pluto has always been a different character for the Disney animators. He was not like Mickey or Donald or Goofy, because he did not speak, and there had to be a good reason for Pluto to do what he did, because otherwise he would just sleep all day. In Springtime for Pluto, that motivation seems very lacking, and the short suffers because of it. 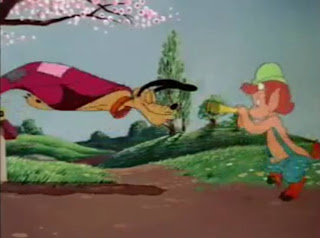 Springtime for Pluto is sort of a disconnected short, as it attempts to merge Pluto with the “How To” narration model and the old Silly Symphonies and come up with something new. That’s not exactly a formula for success. While the concept of Pluto frolicking through the freshness of a Spring day makes sense, it lacks the true comedy of seeing Donald’s frustration or Goofy’s smiling silliness. 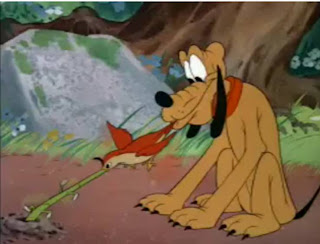 Pluto wakes up from his slumber and sees that Spring has sprung all around him, and proceeds to get involved with the various creatures that are taking in the new day. He chases birds and fights with caterpillars, smiling all the way. This part of the short is very much a call back to the old “seasons” shorts of the Silly Symphonies. It’s quiet, pastoral scenes that show some of the inherent beauty of nature. 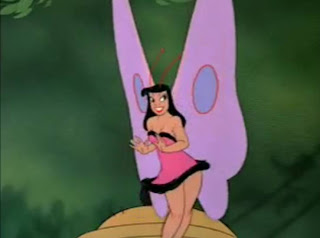 The real question is if Disney wanted to make that sort of short again, why not just do another Silly Symphony? Instead, we are treated to Pluto crashing through the scene, and not in a comedic and fun way. Pluto is a disruptive part of the scenery instead of adding to the beauty or comedy. 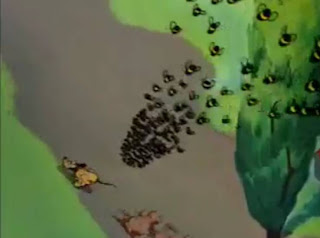 Things get a little weird when a deep voiced caterpillar climbs up Pluto’s tail to spin a cocoon, only to transform into a buxom female butterfly. As the butterfly was dancing around and Pluto was reacting like a Tex Avery cartoon, I just wondered what the point was. Although the animation of the butterfly was fantastic, it didn’t seem to fit in the spot. 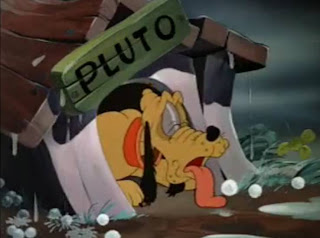 After that we get more of the narrator going on and on about how wonderful spring is, all while Pluto gets rained on and half the countryside is destroyed by rain and hail. Sure, this formula works fine in the Goofy shorts, but outside of that, it’s not as effective. We saw this device used in Contrary Condor, and it was no better there. It seems Disney fell in love with the narrator at this time, but it wasn’t necessarily a good thing. I think Springtime for Pluto is an attempt to merge all these things into something better, but it’s an attempt that fell flat.