1944 ends with Donald Duck, which is fitting for what has been going on in the Disney shorts throughout the 40s. Donald eclipsed Mickey in popularity, and has begun to take over the central role in Disney shorts. To that end, he is now starring in shorts that have a little different twist, such as Donald’s Off Day. 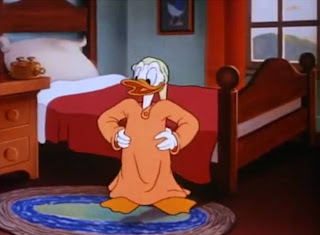 This short plays well to Donald’s strengths, as it gives him a frustrating and difficult scenario, then piles on with the help of his nephews. However, it’s not the same sort of thing that was done earlier in Donald’s career, when the situation created the mounting frustration. There’s a different tactic here, as Donald’s anger doesn’t really build throughout.

The story begins with Donald eager to take on his day off by jumping out of bed and heading out to the golf course. We see him enthusiastically fixing breakfast, showering and doing all the regular morning activities while a bright, beautiful day shines outside. In typical Donald luck, however, the minute he steps outside, rain begins pouring down and ruins his chances for a golf outing. 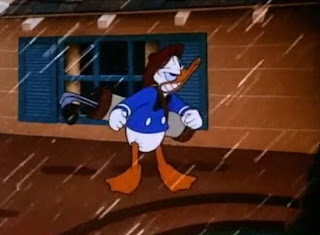 With nothing else to do, Donald turns to books to entertain himself and ends up having quite the hypochondriac experience. He first looks and sees a “coated” tongue that could be a bad sign, not pausing to think that he just ate some licorice. When Huey, Dewey and Louie catch wind of what he’s doing, they decide to join in the fun, playing tricks on Donald to make him think he’s very, very sick. 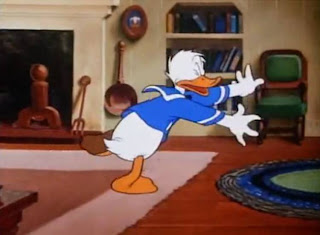 All kinds of tricks take place in a short amount of time. The boys make Donald think he’s blind, then plant a squeaky rabbit under his blanket to make him think his heart is going. Donald even thinks that he’s about to die, and calls the boys over to say his last words. 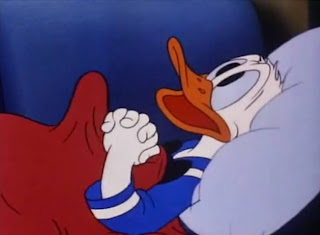 It’s all rather disturbing to be honest, although it is funny. Donald pulls his will out of the safe on the wall and shows the boys that they will receive his prize golf clubs. It’s rather morbid, until Donald figures out what’s happening and comes after the boys. But, the sun shines through and he forgets about them, charging out to play golf. Only then does the sunshine break and lightning strike Donald. 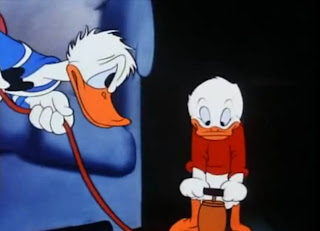 Donald’s Off Day is sort of a schizophrenic short, not entirely about Donald’s golf day and not entirely about his perceived illness. It does manage to merge those two things rather well, though, and manages to be a nice Donald short, if not a great one.