So Minnie Mouse, Pluto and Figaro living together – sounds like a good set up for a joke, doesn’t it? Apparently the Disney staff thought so, too, as this odd trio are set up as the stars of First Aiders, a decidedly World War II short. 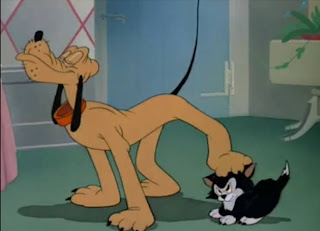 Minnie is attempting to learn first aid, which was a common thing to do during World War II. Fears of bombings like Pearl Harbor or other enemy attacks prompted lots of emergency readiness among Americans of all stripes. In this case, Minnie is learning lots of things by practicing on Figaro and Pluto. 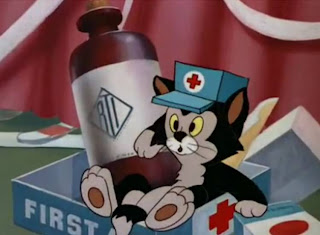 You read that right. Minnie is practicing first aid on Pluto and Figaro. The comic possibilities are endless, right? As it turns out, the animators chose to focus on a rivalry between Figaro and Pluto. I don’t know for sure it was the right choice, but it’s pretty darn funny. The two of them have a natural vicious streak that we have seen in other cartoons, so they play well off of each other. 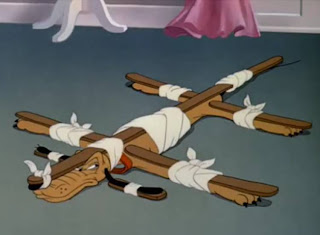 One of the best sequences comes when Minnie tries to bandage Pluto up with splints, then runs out of bandages. Leaving Pluto laying on the floor, stuck to a variety of boards and splints, Minnie runs out of the house. Since Pluto had been antagonizing him before that, Figaro attempts to take advantage of his rival’s precarious situation. 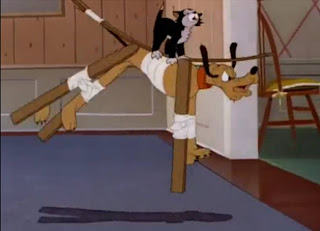 Seeing Figaro leap into action, baring his claws and trying to attack, is quite funny. It’s interesting that these two characters were not used together more often. They would seem to be a natural counterpoint to Tom and Jerry or Sylvester and Tweety, just with different animals. 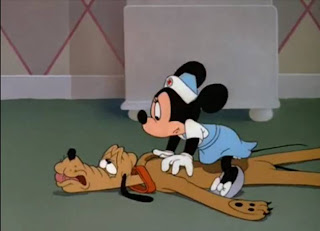 When Figaro begins riding Pluto like a bronco, I had to laugh. Although the back and forth gags between them aren’t particularly inventive, they are tried and true funny stuff. Minnie is there primarily to serve the role of a straight man, imploring one or either of the animals to back off. It’s a simple role for her, but it fits.

First Aiders doesn’t showcase these characters as well as other shorts they have been in, but there is definitely a fun dynamic between Figaro and Pluto, and since that doesn’t appear that often, it’s worth a watch.