At the end of 1944, Disney had made multiple trips to South America and Mexico as part of the Good Neighbor project and had released Saludos Amigos as a feature film that did fairly well. So well, in fact, that another feature was prepped using more animation that was intended for shorts as well as some brand new pieces that would expand the animation art form. The end result is a mixture of pieces that forms The Three Caballeros.

As in Saludos Amigos, there are separate pieces of animation, tied together by a framing device. In The Three Caballeros, it’s the idea of Donald opening birthday presents from Latin countries. The first one he opens is a film about Rare Birds, which manages to combine two shorts into one piece of the film.

The first short is Pablo the Cold-Blooded Penguin, featuring the story of a penguin who is trying to escape the South Pole and find refuge in warmer weather. A cute premise, it doesn’t quite play out well enough for the needs of the film. Pablo is an interesting little bird, but you don’t form much of an attachment to him in the film. There are nice tidbits, such as Pablo sailing up the coast in the same manner that Walt and his team did, but Pablo ends up being cute not interesting. 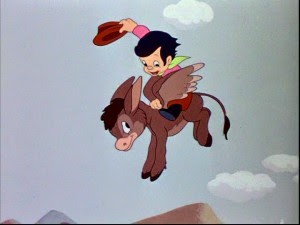 Things improve somewhat with the second short that lives inside the “Rare Birds” film, which is The Flying Gauchito. In this segment, a young headstrong boy dressed as a gaucho discovers a donkey that can fly and enters him in a horse race. The characters here are more appealing and the humor is better, primarily because of the oft used device of the narrator speaking to the character, similar to the Goofy films.

Where Three Caballeros hits its stride, though, is when Jose Carioca pops up, out of Donald’s second present, and offers to take Donald with him to Baia, a lovely town in Brazil. From here we get a beautiful mixture of the genius designs of Mary Blair, the live action performance of Aurora Miranda, and the technical wizardry of Ub Iwerks. 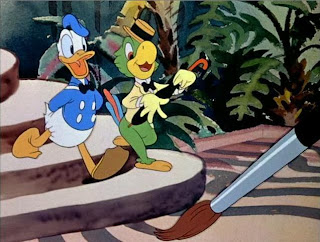 The Baia sequence combines all of these elements, sometimes shifting back and forth between them, and working the live action of Aurora into scenes with Donald and Jose. All of this is framed by the beautiful design work of Mary Blair, who was beginning here to exert more influence over the Disney look, as would be seen in later films and in the parks. 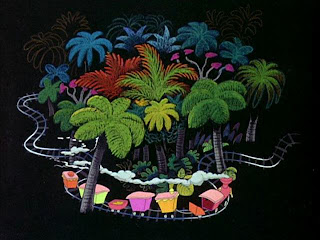 Once this sequence finishes, however, we are treated to the crazy mind of Ward Kimball, who animated the introduction of Panchito and the Three Caballeros song. Ward let his imagination fly on this piece, as characters pop in and out of the screen, singing wildly all the way. It’s a tour de force of zany animation that you would not expect from Disney. 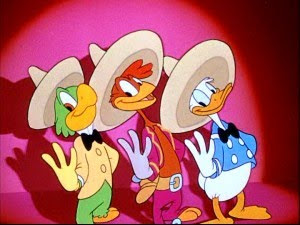 To be honest, that piece is the highlight of the film, despite the fact that there is much more remaining. Panchito’s tour of Mexico with Donald and Jose is rather dull, despite Donald’s repeated insistence on chasing women and the fine effects that show up in the La Pinata sequence. There is lots of beauty there, but nothing hangs all of the scenes together in a satisfying way.
The Three Caballeros is a film that brings a huge variety of influences and styles together into one package. The problem is that these things don’t all mesh seamlessly, and they do not always compliment each other. If you watch each segment individually, they are fun to see, but they do not work together to make a great film.