I’m not going to lie, watching these World War II propaganda shorts is difficult. Very difficult. It did not get any easier when watching Education for Death. Based on “Hitler’s Children” by Gregor Ziemer, this short traces the “education” of a child in Nazi Germany from birth to his enlistment in the German Army. 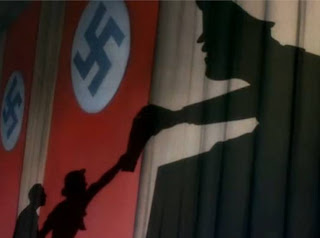 To start with, the animation in this short is simply stunning. It is feature quality, no doubt about it. The use of shadows and depth in the shot is remarkable, especially for a short. The way the shots are constructed, with either dim lighting and darkened rooms for the more serious scenes or the standard animation for the more light hearted scenes establishes the mood. In my opinion, this short showcases the talents of the Disney studio during the war like no other I have seen to this point. 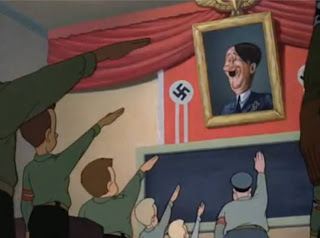 That brings us to the subject matter. Although this was released in theaters as an “entertainment” short, it is most definitely propaganda. The scary thing is, in many, many ways, this short is true. Things that happen in the short, such as the government giving a list of acceptable names, interrupting sick children’s rest, the changing of fairy tales, etc. – these are all true stories, at least to some degree.

In that respect, this is a masterpiece short. It accomplishes the goal of showing what Nazi Germany is like, and does so in an entertaining way. It’s just not the same sort of entertainment you would have found in a Donald Duck short. Education for Death stands in stark contrast to something like Der Fuehrer’s Face, because the subject matter seems so real and terrifying, as opposed to mocking the enemy. 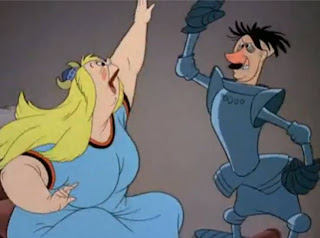 The exception to that is in the Sleeping Beauty sequence, where the animation begins in the same shadowy, realistic style that the rest of the short has been shown in, then switches to a more cartoony style when it’s revealed that the “prince” is actually Hitler. Hitler is portrayed in the same silly manner that He was in Der Fuehrer’s Face. The juxtaposition of this silly, trivial piece to the rest of the short only enhances the seriousness of Education for Death. 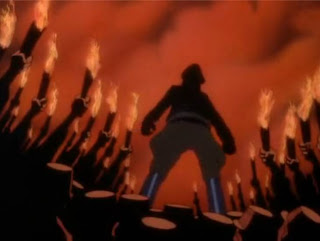 The most chilling shot in any piece of Disney animation has to be the end of this short. As the narrator lists off all the things that have been done to Hans, the child we have followed through this journey, he transforms from child to man, marching all the while. The perspective changes from a side view of Hans to an overhead view of the Nazis marching over the horizon. Slowly, the soliders transform into tombstones, showing a field of death. 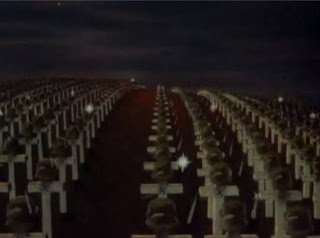 It’s a frightening image, pulled off very well. Education for Death is a masterpiece of propaganda, and quite good as a piece of entertainment. It is nearly impossible to turn away from, riveting in both content and execution. It is, however, quite disturbing to think about, and very frightening.