After the deep and disturbing material of Education for Death, Donald’s Tire Trouble is a welcome respite. Getting back to a light hearted, fun short after lots of World War II and Nazi stuff is good. Sadly, though, Donald’s Tire Trouble didn’t measure up to me, and although still a different tone, it wasn’t as good as I had hoped for. 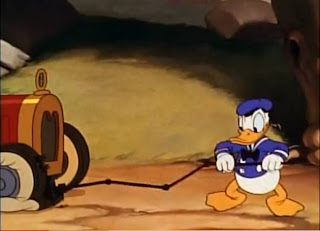 I’m sure part of that was the contrast. After such dark material, I was hoping for a light, funny short that pushed all the familiar buttons. While Donald’s Tire Trouble is a familiar Donald formula, it’s almost too formulaic. It’s honestly a one note joke, and doesn’t come off as much more than that. 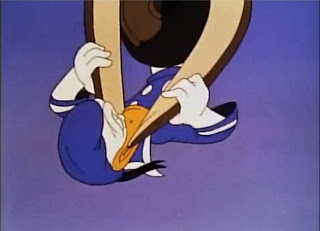 The idea is that Donald is zooming down the road, burning rubber, when he gets a flat tire. Due to the rubber shortage during the war, he doesn’t have a spare, so has to fix the flat and try to make do with it. It doesn’t seem like enough for an entire short, and it really does work hard to stretch the material to fit. 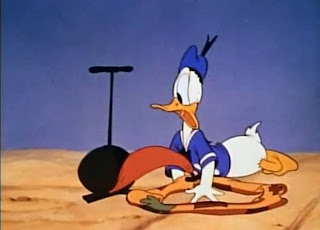 I will say this, Donald gets himself in some precarious positions during this short. It was relatable, because I can clearly see moments in my life when I have been cruising along, and a speed bump got in the way. No matter how hard you try to keep your cool in those situations, sometimes things just keep getting worse. That’s the way things go for Donald in this case. 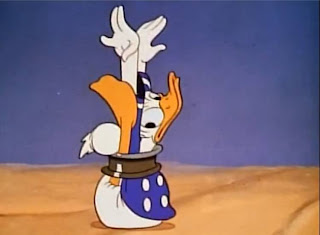 The gags are good, don’t get me wrong. Seeing Donald get folded up in the jack, the tire rim, and the tire itself are all pretty funny. But the problem is that it’s the same joke over and over again. Donald tries to get loose, ends up getting more stuck, then gets into another piece of the puzzle and the cycle repeats itself. 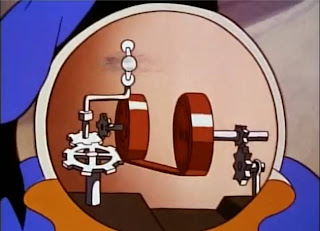 The best bit in the whole short to me was the ending piece, where we get to see inside Donald’s head. It’s then we get an idea of what happens to Donald when he gets so worked up. The shot reveals a spring in Donald’s head getting wound tighter and tighter, until it suddenly bursts. Been there, done that.

Donald’s Tire Trouble suffers from a lack of story. Those of you who’ve read this blog before know my complaints about that. I think it’s just a case of a good idea not being fully developed. Still, so long as Donald is not dealing with Nazis, it’s a positive.