Sorry for being away for so long, but a trip to Walt Disney World, that silly thing called work, and all around life got in the way. However, I’m back now, and on the horse of reviewing more great Disney shorts of 1943. This time, it’s The Flying Jalopy, a fun short where Donald gets to play the hero role. 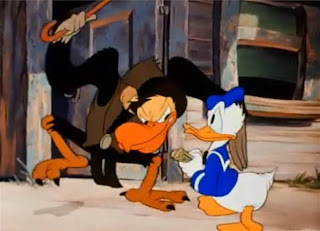 The Flying Jalopy sees Donald pitted against Ben Buzzard, a new character that comes across as pure evil. This isn’t a character like Pete, who’s trying to playfully torture Mickey or Donald. Ben’s motivation is literally to kill Donald. Not tease him or cheat him out of money, but actually to kill him. Kind of frightening, no? 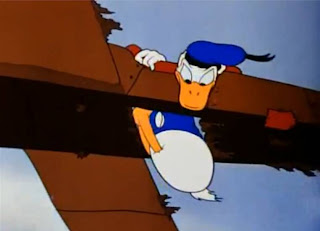 See, the short unfolds with Donald trying to buy a plane. It’s a great nod to the war films, where all Donald wants to do is fly a plane, but gets stuck peeling potatoes instead. This time, Ben Buzzard convinces him to buy a “used” plane. I put used in quotes because there is a sign at the beginning of the short that says “Wrecked Planes” where Ben has crossed out the word “wrecked” and put up “used” instead. 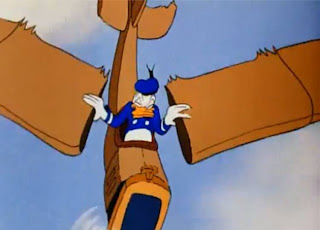 In order to take the plane up, Ben has Donald sign an insurance policy that apparently reads that Donald would get $10,000 if something happens. However, when the buzzard unfolds the policy, it reveals that Ben Buzzard is the beneficiary, meaning that he would have every reason to watch Donald crash and burn. 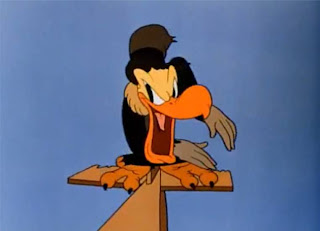 From the moment the plane takes off, Ben tries to make Donald a dead duck. He shoves the plane towards a cliff face, he tries to take the wings off the plane, and ends up attempting to light the gasoline from the fuel tank on fire. Like I said, this is a vicious guy. 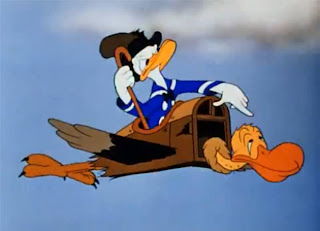 I don’t know if we’ll see more Ben Buzzard in the future, but I somehow doubt it. He seems much more cruel than the other Disney villains, at least in the shorts. Also, with the villain being so much harsher, Donald doesn’t really get a chance to shine. This short is much more about Ben doing harm to Donald than Donald expressing his frustrations. As I have said before, Donald’s at his best when getting increasingly frustrated and being annoyed. This one doesn’t fit that bill, but it’s fun nonetheless.